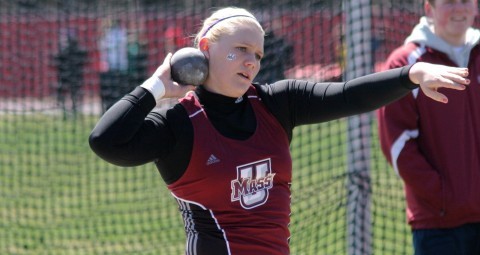 The Massachusetts women’s track and field team opened the new year with a trip to Hanover, New Hampshire and the Dartmouth Relays after a month-long layover between meets. The Minutewomen looked strong all day, scoring big points in many field events and relays. UMass took second place and finished with 93 points, just behind host Dartmouth which blew the meet away with a total 202 points. UMass Lowell finished in third with 56 points.

The breakout star of the day was sophomore Emilie Cowan. She placed in three events including a first-place finish in the 400-meter with a time of 55.86, qualifying her for the New England and Eastern College Athletic Conference Championships.

Cowan was also part of the winning 4×200-meter relay team along with Diamante Spencer, Lindsay Witt and Elizabeth Gulino who combined for a time of 1:43.36. In addition, Cowan  anchored the women’s 4x 400-meter relay team that took third at 3:43.36. Cowan teamed up with Witt, Mary Laver, and Olivia Weir for that performance.

Also proving to be crucial to UMass’ success was the high jump team. The Minutewomen placed in the top three spots, led by freshman Samantha Thomas with a jump of 5 feet, 7 inches. This jump was the second-best mark in school history behind only Andrea Comeau’s score of 5 feet, 10.5 inches in 1999.

Additionally, scoring in high jump for UMass was junior Julia Witt and freshman Jada Harris who both jumped 5 feet, 2.5 inches. Harris also scored in the 60-meter hurdles with a time of 8.98 seconds while posting the fourth best time in program history in the preliminary round at 8.93 seconds.

Senior Kelsey Crawford also had a huge performance for the Minutewomen in the shot put events. She broke her own school record with a throw of 47 feet, 0.75 inches, which was good for second on Sunday. The throw also qualified Crawford for the New England and ECAC Championships.

Joining Crawford at the New England Championships will be Margaret Riseborough, who finished fourth with a throw of 41 feet, 7 inches. Riseborough also placed eighth in the weight throw at 49 feet, 2.25 inches.

In the distance events, Lavery scored placed sixth in the mile with a time of 5:09.02 and Sands was right behind in seventh at 5:10.38. Sands also ran the 3000 meter, where her time of 10:17.90 was just outside of the scoring at ninth, but good for the New England Championships.

The Minutewomen have one meet per week right up until the New England Championships on Feb. 24.

They will next be joined by the men’s team at the Beantown Challenge at the Reggie Lewis Track and Athletic Center in Cambridge on Jan. 14 at 11 a.m.