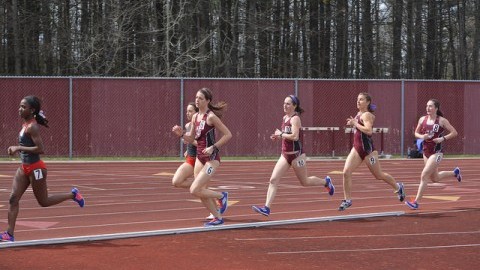 The Massachusetts track and field teams came back into action for its third meet at the Joe Donahue Indoor Games last Friday in Roxbury.

While the women’s team has been flirting with an overall win the past two weeks, taking second at the Dartmouth Relays and the Beantown Challenge, they finally captured an invitational win. Meanwhile, the men finished in the middle of the pack in fifth place.

The women had a tight meet all the way until the end. UMass finished with 135 points while Northeastern took second at 129 points and Brown was on their heels in third with 128 points.

Once again, sophomore Emilie Cowan was the star of the show. Cowan secured a first place finish in the 400 and 200-meter dashes with times of 55.60 seconds and 25.21 seconds, respectively.

Cowan qualified for both the ECAC and New England Championships in the two events. Joining her for New England’s will be senior Diamante Spencer, who ran the 200-meter dash in 25.38 seconds to score third.

Elizabeth Gulino took fourth and also secured a trip to the New England Championships in the 400-meter dash with a time of 58.09 seconds.

Freshman Jada Harris continues to make her mark in the record books in the 60-meter hurdles, but this time she made it to the top, beating fellow teammate Gabrielle Bennett’s 2016 record by just .01 seconds. Harris’s new program record time of 8.74 seconds scored her second on Friday. The former record holder Bennett took seventh in 9.11 seconds, which earned her a spot in the New England Championships.

While Cowan had a great day, there were several other remarkable performances for the Minutewomen. Sophomore Mary Lavery took first in the mile, finishing just under five minutes at 4:59.54, while senior Deirdre Martyn also picked up points in the event, taking seventh at 5:13.64.

An important source of points was the 3000-meter run. Junior Colleen Sands placed third at 10:04.04, while sophomore Brook Hansel and freshman Taylor Blow picked up important points in seventh and eighth place, respectively. Hansel crossed the line at 10:29.79 while Blow finished in 10:33.08.

Kelsey Crawford got in on the action as well, putting up eight points in shot put, throwing an ECAC and New England Championship qualifying distance of 45 feet, 4.5 inches.

For the men, a bulk of their 68.5 points came from field events. Army West Point took the meet with 134 points while Northeastern and Brown took second and third again, respectively. The Huskies finished with 129.5 points and the Bears took 113 points.

The best performance of the day came from junior Evan Burton. His throw of 55 feet, 5.5 inches in the weight throw put him in second place and qualified him for the New England Championships. Burton also picked up a point in the shot put with a toss of 46 feet, 8.75 inches.

While the men’s team still has some work to do to make some noise in the Atlantic-10 Conference, the Minutewomen seem to be hitting their stride. They are peaking at the right time, as both teams have another meet at Boston University at the John Thomas Terrier Invitational. The women’s competition is set to start at 2 p.m. on Friday, Jan. 27. The men will compete at the same time the following day, Jan. 28.