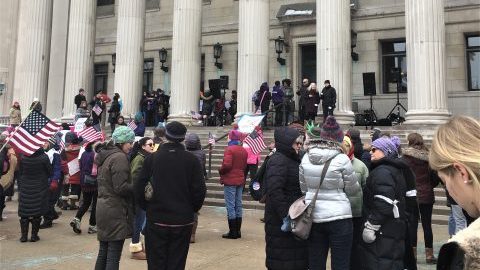 Community members, students and activists gathered on the steps of Springfield City Hall Saturday afternoon to protest the ongoing restrictions to reproductive health care in the United States.

The rally, “Our Bodies, Our Justice,” focused on protecting access to reproductive health care and supporting Planned Parenthood, a nonprofit organization that provides high-quality, affordable healthcare to millions of Americans.

Jossie Valentín, a Holyoke City Councilor and social justice activist, spoke at the event and introduced other guest speakers.

Valentín began the rally by speaking on the importance of protestors and activists gathering in Springfield. She referred to the wave of recent protests across the country in response to the political actions of President Donald Trump and the continuous efforts to defund Planned Parenthood by Republican members of the House of Representatives.

Valentín then introduced co-chairs of the event Liz Friedman and Lindsay Sabadosa. Both Friedman and Sabadosa said that people must stand together and take action against injustice.

“We can do anything together,” Sabadosa stated, “The time is now.”

Protestors held signs that read “I Stand With Planned Parenthood,” “Women’s Rights are Human Rights,” and “Not your body? Not your business.”

Buses from Amherst and Northampton brought activists and protestors to the rally. Carolyn Kelly, a student from Amherst Regional High school, organized a bus from the high school to the event in Springfield Saturday morning. Kelly said that she wanted to take the energy being generated around these issues and turn it into action.

Maria Wehrli, also an Amherst Regional High School student, expressed concerns about the current political agendas in the United States. Wehrli said she was motivated to attend the rally to show people actions toward restricting reproductive healthcare for women will not be taken lightly.

“Women and men are going to put up a fight,” said Wehrli.

The rally was co-sponsored by many local and statewide organizations including Western Massachusetts Jobs with Justice, Planned Parenthood Advocacy Fund of Massachusetts, Pioneer Valley Women’s March, American Civil Liberties Union of Massachusetts, Out Now and Arise For Social Justice.

Throughout the rally organizers spoke on the ways reproductive justice intersects with race, sexuality, gender and class. Organizers said not everyone has the same access to reproductive health care as others.

“When one of us is oppressed, we are all oppressed,” said Valentín.

Carly Burgess can be reached at [email protected]