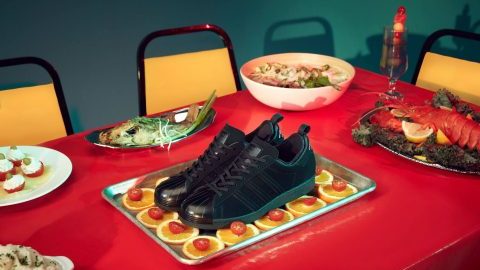 During my short-lived soccer career, I remember one thing clearly from my bench warming status in the third grade and that’s the cool-kid brand Adidas. Shuffling across torn up turf, Adidas used to be the “it” shoe. Everyone wore black and white indoor soccer cleats, both on and off the field, because they had a classic coolness that seemed appropriate for every occasion.

Then something changed. Years passed, and Adidas became a distant memory. Still present in the sports world, but undisputedly removed from fashion. The Adidas stripes were left in the dust behind the “just do it” motto of Nike. Brands like Nike, Puma and Under Armour remained unwaveringly mainstream.

But competition in the marketing world can bring about constant shifts in popularity when brands are neck and neck. Slowly but surely, the Adidas Superstar originals began to rival the trend of white high tops while the deconstructed look of Stan Smiths resurfaced. Then, it felt like new and classic designs of the NMDs, Tubular Novas, Ultra Boosts, AlphaBounces and—last but not least—the celebrity endorsed Yeezys, were popping up everywhere.

I’m not an athletic person, but Adidas is back on my radar.

The influx of sleek new designs, resurfacing originals and celebrity endorsements was a result of Paul Gaudio’s quest for a brand transformation. Gaudio is Adidas’s creative director and his goal was to reestablish what it meant to wear Adidas and create a narrative in which this meaning made sense. He essentially wanted to repurpose the brand to fit the changing world of sneaker culture.

According to Reggie Ugwu’s Buzzfeed article “The Man Who Made Adidas Cool Again,” Gaudio accomplished and succeeded his goal with gusto.

According to an analysis done by SportsOneSource, “Adidas’s sales in North America have jumped by 20 percent or more compared with the same period last year, helping it to overtake Under Armour and reclaim its No. 2 position in the U.S. after more than a year in third.”

In an effort to freshen an expiring brand, Gaudio not only returned to relevancy, but he led Adidas to surpass its competitors in both stylishness and feasibility.

“Two years after pulling itself back from the brink of irrelevance, Adidas looks, acts and earns like a different company,” Ugwu wrote.

Gaudio said in the article “the culture of sport is so pervasive that everybody wants to be a part of it in some way or another … the product has to be relevant whether you play or you just like the way it looks and feels.”

Gaudio’s statement plays into the ever popular trend of athleisure. By opening up the brand to incorporate both athletes and comfortable footwear enthusiasts, the market gives itself room to keep growing. And as the market grows, the popularity of the product grows alongside it.

I feel like it’s particularly important to encompass the world of athleisure in marketing sneakers because it incorporates a whole world of situations where Adidas will continue to be relevant. Going to the gym? Grab your NMDs. Going to dinner and movie? Grab your Stan Smiths. Gaudio and his creative team make it difficult to ignore Adidas.

Despite it seeming like no slogan will be as punchy as “just do it,” Adidas took the mainstream footwear world by storm by capturing the effortless cool of sleek lines and neutral colors. It pivoted a sinking ship of early 2000s soccer players into the cool-kid brand involved in a million-dollar collaboration with Kanye West. By putting that celebrity face to the brand, Adidas skyrocketed on social media and street style outlets, hitting younger audiences with advertising disguised as a simple mirror selfie.

It felt like overnight fashion bloggers, fitness enthusiasts and socialites alike were scooping up some version of Adidas’s new look. I knew it would only be a matter of time before I succumbed to the trend.

According to Marketing Week Magazine, Herbert Hainer, Adidas chief executive, has since spoken out about the brand’s success. “The collaboration with Kanye has elevated our brand perception in the U.S. and beyond,” he said. “It has really set the stage for strong double digit growth.”