Ames: Carvel’s first year behind the bench hasn’t been a failure, no matter what the record shows 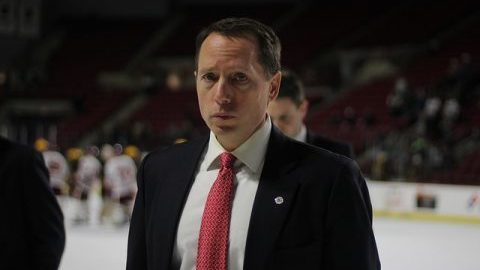 Looking purely from a win-loss perspective, the 2016-17 Massachusetts hockey team has been unsatisfying.

UMass (5-23-2, 2-15-1 Hockey East Association) sits in last place in Hockey East and is currently trudging through an 11-game losing streak. The Minutemen’s chances of improving upon their five total wins will be difficult in their four remaining regular season games.

Despite all of this, Minutemen fans should know that coach Greg Carvel’s plan for this season is going almost exactly how he had planned.

At the onset of the year, Carvel was adamant that establishing a winning culture was his number one priority and playing with heart was more of a concern for him than whatever the final scores indicated.

In their recent outing against Boston University, a 3-1 loss, is a perfect example of how Carvel’s system is trickling into the mindset of his players.

Going up against at the time-No.3 BU  was intimidating enough as is was, but trying to stay competitive after falling behind 2-0 after the first period against a team loaded with top-end talent (11 NHL draft picks) is about as daunting a task as there is in hockey.

Yet the Minutemen kept the Terriers from blowing the game open for the next 40 minutes, even outplaying BU for spurts of time, and skated off the ice in a contest that easily could’ve easily turned into blowout.

Other instances like that include a 3-1 win over Merrimack Nov. 11 and an upset 5-4 victory over Notre Dame Dec. 2, which was ranked No. 12 at the time, show this UMass team has it in them to compete with some of the best in the country.

There have been a fair share of disappointing outcomes as well this season. A two-game sweep at the hands of Arizona State Dec. 16-17 and a 3-0 shutout defeat to American International Jan. 3 at the forefront of bad losses. Even though this UMass team is building for better things down the road, those three games were the only alarming performances the Minutemen played down to their opponents.

In a league with numerous teams stacked with raw talent, UMass can only achieve so much with passionate play. Although, that could change for the Minutemen in the next couple of seasons given that a couple highly-touted players are scheduled to make a stop in Amherst.

Cale Makar is the big name right now when it comes to prospective players on their way to UMass. Makar was recently ranked the 12th best prospect in this summer’s 2017 NHL Entry Draft by hockey insider Bob McKenzie. Makar will suit up for the Minutemen next season.

John Leonard is another 2017-18 commit that can put the puck in the net—something this year’s bunch has struggled to do—as evidenced by his 47-goal, 74-point campaign in 2014-15 with Springfield Cathedral High School.

Matt Murray, a six-foot, 170-pound goaltender will also suit up for UMass next season and has currently compiled a 20-12-2 record with a .913 save percentage coupled with a 2.40 goals-against average this season with the Fargo Force of the United States Hockey League.

In two years, UMass will have Robert Trivigno in its lineup, a center who registered 29 goals last season for Shattuck St. Mary’s 16-year-old team, a feeder program for the prestigious high school that produced NHL stars Sidney Crosby, Jonathan Toews and Nathan MacKinnon.

One thing to remember is that this first season under Carvel was never about their place in the standings. It was about implementing an ideology that success comes at a price and that establishing a consistent winning culture starts with the effort of every player that dons the maroon and white.

This has probably gotten old to many of the fans but nevertheless, stay patient. College hockey in the Pioneer Valley will find its way and behind the respected leadership of Carvel as well as the plethora of youth the Minutemen have, the days of UMass holding real estate in the basement of the Hockey East standings aren’t as far off as they may seem.