An evening with Chef Sanford D’Amato 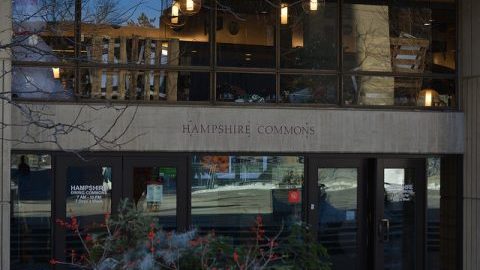 In the latest installment of UMass Dining Service’s Guest Chef Series, Hampshire Dining Commons played host to Chef Sanford “Sandy” D’Amato. With the help of Hampshire staff, D’Amato curated a menu for the evening, which was followed by a cooking demo and a question and answer session.

The food at Hampshire is always on point; the level of what they cook and the scale upon which they do it deserves tremendous appreciation. Still, D’Amato managed to bring that food to another tier. Of all the dishes he brought to Hampshire – the roasted cauliflower hearts, the braised short ribs and the slices of apple buried in coleslaw – it was the sea bass that most appropriately did justice to this man’s exceptional palette.

Later that evening, during the question and answer session, the talk turned to the beginning of his career. He reminisced over an early apprenticeship where a mentor had told him, “Sandy, you’ve got a wonderful palette, but you can’t cook for sh*t.”

It was from that point of having naturally great taste yet lacking the work experience and skill required of successful chefs that D’Amato began his career.

After a friend, the prodigal director known only as William, and I consumed everything D’Amato had to offer, we parted ways and I went to see what the cooking demo had to offer. It was quite an affair, situated in that corner of Hampshire that can be closed off. There was a television screen zoomed in on his hands and an announcer sporting a suit and “Grease” worthy proportions of hair gel.

The announcer asked if anyone had seen the Patriots game and a tumbleweed rattled across the stage. He asked if the audience was “excited.” Clearly not satisfied with the reply, he inquired once more stating, “That doesn’t sound like you’re excited.” I’m not sure what he thought he was introducing but he eventually segued into a biography of Sanford D’Amato.

D’Amato comes highly decorated, both personally and for his late restaurant “Sanford,” which he recently sold to the current head chef.

One of the first things that strikes you about Sanford is his delicate, ­measured speaking voice. The second thing is his bright eyes set behind small circular glasses. He seemed very much at home waist high to a chopping board, staring at a room of strangers.

He proceeded to make a caponata, a traditional Sicilian dish with eggplant at its core. The only thing more interesting than watching D’Amato’s hands effortlessly prepare ingredients was hearing his understanding of the tumultuous times in Sicilian history that have influenced its food.

“Sicily has been invaded by just about everyone. Its cuisine incorporates Asian and African influence,” he told the audience before throwing cocoa powder into the pan.

After the demo the floor was opened to questions. When asked about the merit of apprenticeships versus cooking schools, like his own experience at the Culinary Institute of America, he gave that account of an early mentor judging him. His point being that you can have good taste, but if you don’t have the skills to back it up, you will likely amount to little.

It was culinary school that prepared him for the move to New York where he was at the Waldorf Astoria in 1974. That’s what is really appealing about D’Amato; he is from that old guard of chefs. He represents that pre-television network, tattoo emblazoned, pop-up era (not that any of those things are bad). But D’Amato did acknowledge that TV network changed everything.

He said the perception changed from “circus carnie” to something respectable, but at the same time this swelling popularity has people getting into cooking for the wrong reasons. For him, it has nothing to with screen time or notoriety. Above everything, cooking is a skill.

When asked how he decided he was going to cook for a living, he replied with an anecdote about one evening in college when he had taken a break from studying to make a snack. It was whilst sautéing potatoes when he realized that he enjoyed this simple act of making dinner more than anything he’d experienced in a classroom.

The story proffered a beautiful sentiment of pursuing one’s passion but the evening overall rooted that pursuit in the reality of hard work. That combination got D’Amato to where he is today, a place any chef would be lucky to be.