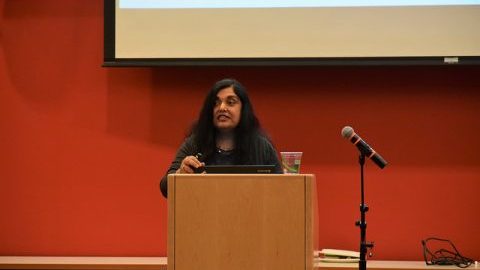 Author and University of Connecticut professor Manisha Sinha met with students and faculty at the University of Massachusetts Amherst on Tuesday to discuss slave resistance and the making of American abolition. During the discussion, Sinha challenged the idealizations of the abolition movement as being orchestrated and conducted by white, middle-class Northerners.

The author highlighted not only the historical, but also the social significance of recognizing that the abolition movement was built by the acts of rebellion and resistance of slaves and that “they were not just passive recipients of freedom.”

Sinha stressed the importance of understanding that slave rebellions led to the radicalization of Northern politics and fueled civil, political and legal discourse of abolition. Slaves took their injustices to court where they fought legal battles against their bondage despite slavery’s legalization at the time. These slaves argued English common law, or the ideals of liberty and freedom, apply not just to whites but also to Black people and slaves.

Across the globe, slaves and abolitionists alike organized into groups such as the Sons of Africa and The Society for the Relief of Free Negroes Unlawfully Held in Bondage to display both solidarity and resistance to slavery and the systemic denial of Black rights. In doing so, slaves “adopted the language of liberty for themselves” despite their exclusion from such a value at the hands of white-operated political, judicial and legal systems, according to Sinha.

Sinha discussed how international slave rebellions in the United States, Haiti, Jamaica and Cuba affected abolition in the U.S. by acting as “sources of inspiration for abolitionists,” transforming the content and discourse of literary works.

“Anti-slavery sentiment grew in tandem with rebellions…There was an intimate connection between slave rebellions and the abolition movement,” Sinha said.

Despite growing conflict between the North and the South, with the enactment of the Fugitive Slave Law, slaves and Black abolitionists “displayed considerable political sophistication and shaped abolitionist tactics and rhetoric” by continuing to resist through grassroots activism and by building systems of humane and protection societies, refusing to adhere to the law. “Grassroots activism was one side of the coin of legal action,” said Sinha.

With the growing prevalence of slave resistance and abolitionist organizations and literary publications, the Republican Party began to radicalize as politicians and lawyers were influenced by anti-slavery activists.

Despite a U.S. Supreme Court decision upholding the constitutionality of the Fugitive Slave Law, slaves and abolitionists refused to let the ruling squash their efforts, according to Sinha. They refused to enforce the law and continued the fight for freedom on a noncompliant front.

When faced with yet another challenge, Sinha noted – the divide between differing groups of the abolition movement, typically defined by religion – the strength of slaves and their determination to resist acted as both physical and spiritual reminders of what the fight was truly for: the freedoms of Black people denied by racism, economic exploitation and white supremacy.

“Actions of rebellion brought these different factions together,” said Sinha, attributing the unification of the abolition movement to the unyielding resistance of slaves.

According to Sinha, the physicality of the rebellion translated into an artistic, expressive shift in storytelling narratives, deconstructing the white agenda of portraying masters as kind and paternal, which was constructed by pro-slavery white people as a way to justify the dehumanization of slaves and rationalize the institution itself so that it may continue to benefit them economically.

“Emancipation didn’t come about because of a law or decree,” said Sinha, but rather because of slaves’ persistence and determination to rid their shackles of physical, mental and emotional bondage.

Junior anthropology and linguistic double-major Kate Barvick expressed appreciation for the discussion, as it is one not often told in history.

“I thought the talk was really interesting…Racial justice and accurate history are very important topics right now, especially telling stories of the activists in times’ past. I thought it was a really interesting view into the abolition movement,” said Barvick. “But we never really get an in-depth look at it or at Black leadership and slave resistance in the abolition movement, so I thought that was a really enlightening aspect of history I’ve never heard before.”

Julia Riordan can be reached at [email protected]