Derek Kellogg: ‘I wouldn’t say any starting lineup is secure at this point’ for UMass men’s basketball 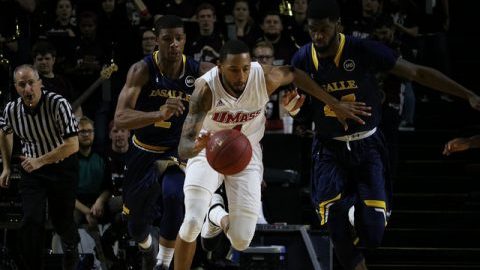 After Massachusetts men’s basketball coach Derek Kellogg switched his starting lineup prior to Sunday’s 84-71 win against La Salle and started the “red”  reserve team, Kellogg won’t commit to keeping one set starting rotation for the remainder of the season.

“I wouldn’t say any starting lineup is secure at this point and it makes it kind of fun,” Kellogg said on Monday morning’s weekly Atlantic 10 media conference call.

Against the Explorers, UMass (14-15, 4-12 A-10) started C.J. Anderson and Zach Lewis in the backcourt with freshman forwards Ty Flowers and Brison Gresham starting alongside center Malik Hines. Sunday marked the first starts of the season for Flowers and Hines, while Gresham (nine starts), Anderson (four) and Lewis (four) have come in and out throughout the year.

“I thought we had a couple really good practices going into [Sunday] and it felt like I’ve been talking about an early September practice or an October practice where the guys were still fighting for playing time,” Kellogg said. “To see guys hungry, and to see guys get an opportunity, I thought was good for our team and woke up some of the guys who maybe have been given a little more and [been] starting for a while some hunger.”

Kellogg spent time on the conference call noting the individual performances of Lewis and point guard DeJon Jarreau as two of the driving forces behind the Minuemen’s first win at Mullins Center since Jan. 18.

Lewis scored a career-high 37 points — the most by any A-10 player in a game this season — while Jarreau’s shooting numbers were the best he’s seen all season shooting 7-for-9 from the field, making all four 3-pointers he attempted.

“I thought we got a great performance out of Zach Lewis against La Salle. I think the play out of my point guard, DeJon Jarreau, he’s starting to really come around,” Kellogg said. “[Jarreau] had a great week, I think he had 18 at GW and 20 [Sunday] and it really looks like he’s emerging. Our guys are playing like they’re going to compete and play.”

But in addition to the individual performances by the two guards, Kellogg also thought the Minutemen played his brand of “UMass basketball” for “a lot of the game” — doing the little things that don’t necessarily appear in the box score.

“I kind of envision us diving for the loose balls and coming away with the 50/50 balls,” Kellogg said about where he wants to see his team moving forward. “I envision some of the younger guys kind of asserting themselves the way they were recruited and coming along.”

Kellogg added: “I also envision some 3-pointers going in and that hadn’t really happened in many games this year and the games that it has happened, we’ve played a little better.”

UMass had its best shooting performance from behind the arc Sunday converting 55 percent (11-of-20) of its shots against La Salle. The 11 made 3-pointers were the fourth most the Minutemen have made all season.

While traditional Kellogg team’s predicate themselves on man-to-man defense, Kellogg went with a zone look against La Salle to help defend the Explorers’ talented back court of Jordan Price, Pookie Powell and Amar Stukes.

But as well as the Minutemen played in their zone, much of that stems from their ability to take care of the ball on offense, limiting themselves to 13 turnovers.

“Look at it this way also, we only turned the ball over 13 times compared to some games where we had the countless mental errors or plays that were kind of basketball plays that led to easy baskets,” Kellogg said. “We eliminated a lot of those and whatever defense we were in, we could get into it instead of playing transition defense and spring back on defense all game long.”

La Salle’s 10 free throw attempts were the fewest any opponent has taken against UMass this year.

“One other thing is we didn’t march them to the free throw-line,” Kellogg said. “I mean I’ve looked at the clock numerous times this year and there’s 13 and a half minutes left and we already have the other teams in the bonus. So it was nice to see them work for their baskets, we didn’t give them any easy ones and we didn’t march them to the free throw line like it’s been the case all year.”