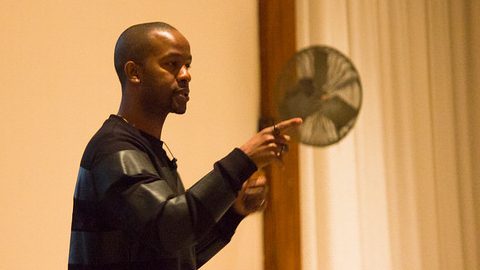 Wade Davis focused on promoting gender equality and engaging men in converstions around issues of gender discrimination and sexual violence against women during his talk on Thursday, Feb. 2.

The event, titled “Protecting Me and We: Ending Gender Discrimination and Sexual Violence,” was sponsored by the Men and Masculinities Center and part of Black Heritage Month, organized by the Center for Multicultural Advancement and Student Success at UMass.

As a writer, educator, activist and former NFL football player, Davis began his talk by emphasizing why men should care about gender discrimination, sexism and sexual violence. He urged the men in the audience to speak up and start having conversations with each other.

“Women are having this conversation,” Davis said at the start of his talk, “guys, when are we going to have it?”

Davis also argued that gender discrimination and sexual violence impacts everyone, not just women, and men have a responsibility to act.

“This is important.” Davis stressed, “It’s not just about you. It’s about all of us.”

Davis then turned to talking about intersectionality, making the link between homophobia and sexism. Davis came out publicly in 2012 and has additionally been working toward equality for LGBTQ youth in sports and eradicating homophobia in sports.

According to Davis, the root of homophobia is sexism, which Davis defined as the subconscious, yet pervasive, belief that women are less than men.

This belief promotes the idea that men have power and dominance over women, leading to gender discrimination and sexual violence.

Davis shared some harrowing statistics about sexual violence, including that 1 in every 5 women will be sexually assaulted while in college.

Davis reacted to this statistic by saying, “I want to make the world safe for everyone.”

Additionally, Davis highlighted the fact that perpetrators rarely face any legal consequences for their actions.

“This should make you really, really angry,” Davis said as he went on to share a statistic revealing that out of every 1000 rapes, only 6 perpetrators will go to jail.

Davis also talked about gender discrimination in the workplace, including the gender pay gap and the struggle women face to obtain positions of power.

Throughout his talk, Davis engaged with the audience, continually asking questions and encouraging participation. He made a point to clarify that he wasn’t putting down men, but rather educating people on issues that need to be thought about and brought up in conversation.

Davis ended his talk by urging students to continue the movement on campus to address issues of sexism, sexual violence and gender discrimination, stressing again that people have a responsibility to talk to each other and educate themselves.

“Guys, shows up,” Davis said, addressing the men in the audience one last time, “Your sisters are counting on you to use your voices.”