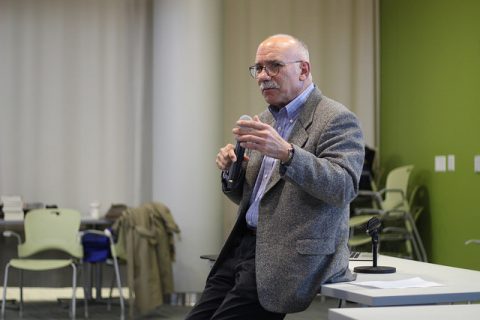 On Thursday, Feb. 2, freelance reporter Reese Erlich recounted his coverage of the Syrian Civil War, analyzing the conflict’s clashing sides to tackle the question of how much the United States should intervene. The answer, according to Erlich, is that there should be “no intervention at all.”

Erlich gave his talk to a crowd of seemingly engaged college students and adults in the Communication Department Hub in the University of Massachusetts Amherst’s Integrative Learning Center.

He began the discussion by presenting a slideshow of photographs he took during his time in the middle east. One young girl was pictured holding a sign and protesting in a crowd of Syrian citizens. “Stop killing people,” was written on it.

“My views are outside the mainstream,” said Erlich,  “There’s a very narrow range of opinions [in Washington D.C.]. Either you want a lot of intervention, or you want a little.”

“It made me think more about the kind of media we take in every single day and the flaws that are inherently in it,” UMass senior and journalism major Bridget Higgens said after Erlich’s presentation. “You need to look to other sources to get your info, and you need to look in as many places as possible.”

Erlich’s first visit to Syria was in 2002. He returned there in 2011 to cover the Arab Spring Uprising, also reporting from Iraq, Syria, Jordan, Tunisia, Libya, Egypt, Lebanon, Turkey, Oman and the United Arab Emirates. It was during this time that Erlich began covering the Syrian civil war and the refugee crisis.

On a map of Syria that also included parts of Jordan, Erlich pointed to a few of the places he traveled to, including Zarqa, a city approximately an hour-long drive north from Amman, Jordan’s capital.

Erlich described how in 2015 he drove to Zarqa to interview Abu Qatada, a radical Islamic cleric and Jordanian national, who was once described as Osama bin Laden’s right-hand man.

Erlich talked about the difficulties of getting Qatada to agree to the interview, noting how notorious Qatada is for pushing journalists away. After some badgering on the part of Erlich, Qatada submitted, according to Erlich.

“Never take no for an answer,” Erlich said amidst chuckles. “That’s a good journalism motto.”

Erlich shifted gears to discuss the geopolitics of the area, clarifying who is involved in the conflict and why. Among those mentioned were the more well-known international actors and nations, including Russia, the United States, President Bashar al-Assad of Syria, Syrian rebel groups and the Islamic State. He also explained the lesser-known involvement of Kurdish and Turkish forces.

Often asked why Russia is involved in the conflict, Erlich explained that while Russia’s official reason is to “protect the sovereignty in Syria,” the real reason is “geopolitics,” because of its key borders next to Israel, Lebanon, Iraq, Jordan and Turkey.

At the end of the event, Erlich opened up discussion to audience questioning. Among a variety of issues, people asked about what a “post-war Syria” would look like, as well as “how receptive [he finds] the people of Iraq, Syria and the middle-east” to him, “as an American journalist.”

It was at this time that Erlich also predicted what Donald Trump’s foreign policy would be in regard to Syria. His view was less than favorable, believing that Trump’s erratic actions and contradictory support for Russia—in conjunction with his harsh criticisms of Iran and claim that he would “bomb the sh*t” out of ISIS—goes along with an “ideological goal that doesn’t align with reality.”

“The takeaway is Trump is about to embark on an escalation of the situation in Syria that’ll be disastrous for Syria and America,” Erlich added. “The war is far from over.”