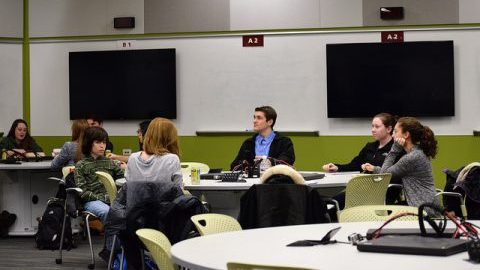 The University of Massachusetts is trying to make the switch to more Team-Based Learning (TBL) classes, and it’s starting to affect how college students learn. Traditionally, we’ve been exposed to the big university style-lectures, however, with increases in enrollment, some universities try to simulate the collaborative environment of smaller colleges using TBL-style classes.

The idea behind TBL is that rather than exclusively having a professor lecture the class, the students themselves learn the material on their own from a textbook, then spend class time solidifying their understanding of the material in groups. Evaluation is done based on both individual exams and group-based tests.

I don’t have a problem with TBL itself. I think it’s a great concept that, if implemented correctly, could revolutionize how education is done. It’s established that collaborative learning styles have a positive impact on student performance. As a science major in a research lab, I know that being able to work in a team is a major asset and that collaborative, decentralized learning is the way of the future—think Khan Academy.

This isn’t my gripe. My issue is with poorly implemented TBL styles that I’ve personally experienced in the classroom before. In the classes that I’ve had with TBL, the biggest issues have been with how the system has been rolled out. In the past, I’ve had courses that were flipped-pace as well as group work-oriented, but I’ve only had experience with a handful of TBL courses, which aim to combine both of these elements, often with sloppy execution.

Take Introductory Physics for example. Because it’s not terribly important for my major, and because I could remember a good deal of the material from high school, I took the algebra-based physics course to fulfill a requirement while intending to spend my time focusing my attention on the other courses I was taking. We had groups, but at the start of the semester, there was very little ensuring that there was a correct mix of experience. In theory, the members who were less experienced with physics would get help from those who were more experienced, evening out the playing field.

In execution, because the course never tried to standardize the prerequisite math skills at the start of the semester, several groups suffered the problem of getting stuck on problems and having no guidance. For a decent portion of the semester, it was a game of the blind leading the blind. Sure, it was possible to defer to the teaching assistants for help. However, almost every problem required a working knowledge of trigonometry, which most students had understandably already forgotten from high school. I witnessed several people fall behind on material that should have been trivial if the course had simply tried to standardize people’s math skills at the beginning.

An unintended side effect of this was that the gap between students understanding widened. Those who remembered trigonometry and physics from high school realized that they were pulling most of the weight in their groups. For a class that met every day at 9 a.m., this was a sure incentive to simply not show up. Of course, this meant that their teammates now had no one to go to for help when given a difficult problem. The students who were already good at physics passed with flying colors, while those who weren’t stumbled through what should have been basic material.

In its second semester, the course seems to be solving this issue. No longer is it purely self-teaching; there’s now a professor standardizing the class’ knowledge base before sending us off to do group work. From the anecdotal evidence I have of people complaining, I can tell that students are already getting much more out of this system. There’s still the option to self-learn for the dedicated, but no longer is the burden of explaining difficult concepts left solely to other undergrads.

As a general trend, the team-based classes I’ve enjoyed the most have been ones that involve group work, but also maintain a significant amount of instructor involvement. My cell biology class featured group-based learning, but it was in the form of discussions during iClicker questions as part of a traditional-style lecture. There was still a professor explaining the larger, tricky concepts, but groups were given the correct amount of autonomy to figure the details out for themselves. Of course, there are valid criticisms of that course (and all courses), but at least for classes in the sciences, it makes more sense that the professor with the formal training and experience should be the one to teach the fundamentals.

Now, this isn’t to say that all classes must have a person at the front lecturing at the class. Some of the most interesting classes I’ve taken have involved the instructor as a mere moderator in class-wide discussions. Other courses I’ve enjoyed used the instructor as simply a guide, someone who facilitates a lab group while the students ask for help only when an experiment isn’t working. And yes, I’ve had the traditional big-hall lectures, which I’ve still learned from perfectly well.

Overall, I think TBL has great potential, but the way I’ve experienced it implemented at UMass leaves much to be desired. Surely some will say that their experience with these same classes was vastly different, and that they enjoy it. I believe that for these people, the elements of team collaboration happened to work correctly, but will not necessarily work the same for everyone. The University needs to encourage TBL classes to be in the “sweet spot,” where students will maximize learning from their peers while also minimizing the frustration associated with being left to figure things entirely on their own. TBL is probably the way of the future, but if we want it to stick, we’ll need to fix it early on.

Edridge D’Souza can be reached at [email protected]