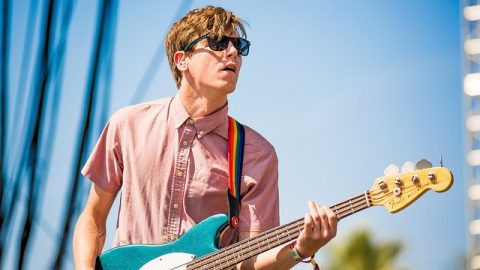 The indie rock band STRFKR will be heading to Northampton this Tuesday, in the midst of its nationwide tour. STRFKR will headline the Pearl Street Ballroom, accompanied by synth-pop artist Psychic Twin.

Originating in Portland, Oregon, STRFKR first came together in 2007. Immediately, the band’s merger of psychedelia, electronic and dance influences with indie-pop set it apart from the pack. Though it originally began as a project for lead vocalist Joshua Hodges (who also plays keyboards, guitar and percussion for the band), STRFKR eventually came to include Shawn Glassford on bass and keyboards and Keil Corcoran on drums, keyboards and backing vocals.

Formed after a spell with the band Sexton Blake, Hodges originally named the band “Starf***er” as a joke, but as the band gained popularity, the name stuck. The band briefly changed their name to Pyramiddd under the guidance of a business associate, but reverted to a less profane abbreviation of its original name in 2012.

Hodges has previously characterized STRFKR’s music as “dance music that you can actually listen to, that’s good pop songs, but also you can dance to it.” Its sound is, in a sense, futuristic and progressive. It seems to take listeners into the next realm of pop.

Having released “Starf***er” in 2008, and “Jupiter” in May 2009 with Badman Recording Co., STRFKR caught a break in 2010 when it signed with Polyvinyl Records, with whom the band released the critically-acclaimed “Reptilians” in March of 2011. “Reptilians” shows the striking contrasts the band is capable of, balancing upbeat melodies with dark, often morbid lyrics.

While STRFKR’s music isn’t regularly aired on commercial radio, many of its songs have been featured in films, television shows and commercials over the years. “While I’m Alive,” the opener of 2013’s “Miracle Mile,” was featured in the soundtrack of the film “The Fault in Our Stars.” “Rawnald Gregory Erickson the Second,” one of the band’s first singles, was featured prominently in a 2009 Target advertising campaign, and has since been featured on shows like “The Blacklist” and “Weeds.” while its cover of Cyndi Lauper’s “Girls Just Want to Have Fun” was featured in a 2012 Juicy Couture campaign.

STRFKR is currently touring behind its newest album, the darker, more inward-looking “Being No One, Going Nowhere,” which was released on Nov. 4. The band will be sure to liven up Northampton with its unique, dance-infused sound this Valentine’s Day.

The show begins at 8 p.m. Tickets start at $15, and are available at nbotickets.com.