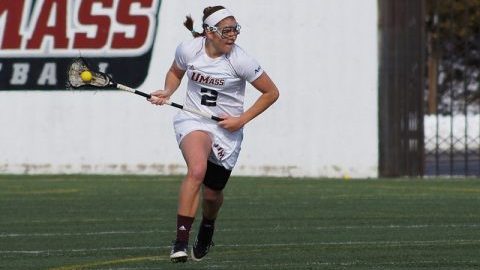 There comes a time when every athlete has to walk away from a sport they’ve known all their life and pursue other things. Whether it’s injury, old age, lack of talent or just simply bad luck, everyone’s playing career runs out one way or another.

Following her final season at UMass, McGovern realized she couldn’t let go of lacrosse so abruptly and wanted to stay involved in the game in any way she could. Since her playing career wrapped up, McGovern has looked to coaching to keep her passion for the sport alive.

“The reason I got into coaching was I wasn’t ready to leave lacrosse and the world of lacrosse,” McGovern said. “[I] had a couple of conversations with Angela [McMahon] about it, over the course of my senior year as well. I just decided to try it and now I’m here.”

The Acton, Massachusetts native has a lengthy list of achievements from her time spent duking it out on the turf for the Minutewomen.

In 2013 she was awarded All-American status for her lockdown defensive play. In 2014, her senior year, she was named captain and led UMass to its fourth consecutive NCAA tournament berth. She was also a two-time Atlantic 10 first team selection, a two-time A-10 all-academic honoree and was a four-time A-10 conference champion.

McGovern was a record holder in draw controls with 201 total wins and had 110 wins in her junior season, a school record that was held until Hannah Murphy, a senior for this year’s team, surpassed it in 2016.

Her on-field capabilities were quite sound, however, even before McGovern arrived in Amherst, she spent two seasons as an assistant coach at Bryant honing her craft. McGovern credits that experience as being an invaluable step in her development as a coach.

“I learned a lot right away because I was the only assistant at Bryant, it was just me and my head coach,” McGovern said. “Since there were only two of us, I did a lot and I put my hands in a lot of different things.”

“Obviously helping with recruiting, and budgeting, and the on-field stuff, you kind of had to do everything when there’s only two people,” McGovern added. “I would say I learned how to do it all in a sense, and definitely how to run a defense and run drills, and do the on-field coaching for sure.”

McGovern helped the Bulldogs become one of the best teams in the nation in draw-controls (ranked 17th in 2015, averaging 13.11 wins per game) as well as guide an offense that continually improved while she was there.

In July of 2016, McGovern got a once-in-a-lifetime opportunity to return to her alma mater and coach the Minutewomen.

“It is obviously great to be back, having such close ties with this program,” McGovern said. “It’s been great, nothing’s changed too much, so yeah I like being back.”

McGovern did admit to a little awkwardness at first, coming back to coach the same team in the same place she starred for four seasons, but that feeling quickly dissipated.

The jump from player to coach is never an easy step to make and many players try to do it and ultimately fail, for one reason or another. The pressure that comes with returning to the school you suited up for not too long ago can be even more of a challenge.

Yet, much like the difficulties of playing she encountered over the course of her career, McGovern has handled the transition seamlessly.

“I think it’s been an easy transition,” McGovern said. “Just from being a senior captain you kind of have that leadership role, running your defense on the field, and relaying messages from your coach.”

“It’s different not being on the field for sure, sometimes it’s hard not being on there,” she added. “I was also injured my fall of my senior year so I did have a sideline role. I was exposed to the coaching side of it pretty early on.”

This supposed match made in heaven almost didn’t happen, as McGovern nearly chose an alternate path after her playing days at UMass.

The desire to remain involved in the sport proved to be too enticing to pass up.

Now that McGovern has settled in to her new job on the coaching staff, her duties are almost identical to those when she was a player. As an assistant, she will be in charge of the defense as well as working with players on draw controls, her two specialties during her playing days.

The Minutewomen are off to a 1-2 start this season, and despite the relatively slow start, McGovern has high aspirations for her team.

“I guess to continue to help this university, in terms of our program, to succeed. Hopefully [we] win more Atlantic 10 championships, and hopefully [we] make another jump in the NCAA tournament,” McGovern said.

When it comes to her own personal goals, McGovern is simple and straightforward.

“Just to get better as a coach and learn more and do more and help this program succeed really,” McGovern said.

If her coaching career mirrors her playing career in any fashion, McGovern should have no worries about vacating the game of lacrosse anytime soon.