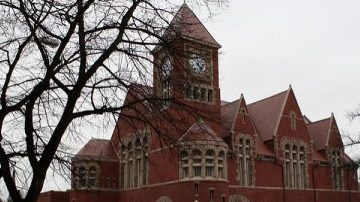 Longtime Amherst resident and blogger Larry Kelley, 62, was killed in a head-on crash on Route 9 in Belchertown at approximately 2:45 p.m. on Friday, according to a press release by Communication Director of the Northwestern District Attorney’s Office Mary Carey.

Kelley was traveling east on Route 9 when a collision between his vehicle and a westbound vehicle operated by an 18-year-old Belchertown male collided. Kelley was pronounced dead at the scene.

The 18-year-old driver and his two passengers sustained non-life threatening injuries and were transported to Baystate Medical Center for treatment, according to the press release.

The incident remains under investigation and no charges have been filed.

Kelley leaves behind his two daughters, Jada, 10, and Kira, 15, according to the Daily Hampshire Gazette.

Kelley was known for his blog, “Only in the Republic of Amherst,” where he reported town politics and breaking news events and often shared his opinions on various town issues.

Kettie Lawrence knew Kelley to be prominent in the Amherst community

“Larry taught me so much about local government, took the time to answer all of my questions that I asked him about local, including the often heated, intense town politics,” wrote Lawrence on Kelley’s Facebook page. “He stood fiercely by his beliefs, and solidly in his convictions, despite any and all criticism, he held solid ground, always.”

In 2012, Kelley appeared on Fox News to criticize the town of Amherst for its decision to not fly the American flag on Sept. 11 of that year. At the time, the Amherst select board decided to commemorate the anniversary of the 9/11 attacks by flying the flag once every five years.

“I can’t personally think of a more somber occasion than 9/11,” Kelley said on the broadcast. “Why don’t we fly the flags on 9/11? I mean, do you really want to be remembered as people who think that 9/11 is only worth remembering one out of five years?”

In that appearance, Kelley remembered an Amherst select board meeting that took place on Sept. 10, 2001 to discuss the placement and duration of flying the American flag. The board decided to fly the flag on six days during every year: Patriot’s Day, Memorial Day, Flag Day, July 4, Labor Day and Veterans Day.

Kelley remembered a University of Massachusetts professor dubbing the flag “a symbol of terrorism and death and fear and destruction and oppression. It is nothing to be proud of.”

On the next day when the attacks occurred, according to Kelley, news outlets like The Wall Street Journal, Fox News and CNN reported the professor’s quote.

“It probably got in front of 30 million Americans,” Kelley said. “I think it made the town look horrific.”

In September of 2015, the select board agreed to fly the flag on Sept. 11 every year.

The studio, which Kelley eventually retired from, was known formerly as Karate Health Fitness Center, and is now New England Submission Fighting in Amherst.

Kirik Jenness has looked up to Kelley since he was a teen.

“I first met him, I was 16 years old, and I was a young black-belt competitor,” said Jenness. “He was the number one black-belt competitor in New England so I idolized him,” said Jenness. “…I started training with him, and then maybe my junior year, possibly my senior year, he opened up a martial arts studio in Amherst and when I graduated from college I bought into it. And then we ran that for, oh my gosh, at least 25 years or so, somewhere around there. And then he retired to be a primary caregiver for his kids, I kept the studio still going, and it’s going to this day.”

In the late 1960s, tournament karate emerged and big names like Chuck Norris were known. In the early 1970s when full contact also emerged and opened the door for new types of competitors, the big name to come out the Boston area was Larry Kelley.

“Larry burst on the scene with incredible kicks, I mean, incredible kicks,” said Mike Genova of Columbia, South Carolina who fought with Kelley. “We have not seen kicks like that expect from a guy named Bill “Superfoot” Wallace.”

Genova remembered Kelley beating just about anybody in his division.

“He was a very flashy fighter,” Genova said. “He was well-liked. Not all fighters were well-liked among their peers.”

In the late 1970s, Kelley began to travel more to Texas, Minnesota, Florida and California to compete in tournaments. He would receive first or second place, said Genova.

Kelley became one of top five best kickers in the country, according to Genova.

“The thing that made Larry special is that most of the top fighters came out of a staple of good fighter,” said Genova. “But there was nobody else from his area that made top 10 the entire time. He pretty much did that all on his own.”

“And I have 300 championship trophies, so I done my share of winning, but Larry was actually in a level, I think, a level better than me,” Genova said.

Raymond McCallum was also active in the martial arts community and remembered looking up to Kelley as being a wonderful fighter.

“We would watch each other fight a lot,” he said. “He was the only one of the top 10 in my era that I never got to fight, but we sure watched each other a lot.”

Jenness said that while Kelley was largely known for his blogging and fighting, he was much more than that.

“I guess if there was one single thing I would want to communicate to people, I think he was mostly known for his blog, which could be fairly aggressive and known for fighting, which is aggressive… but that certainly didn’t encompass him,” Jenness said. “He was also a genuinely, really sweet, peaceful guy. He loved rainbows, and that kind of thing. So I guess all I would say is his fighting career and the blogging didn’t define him. He was that, absolutely, and a lot more too. He was also a really sweet, gentle person,” he said.

Helen Thelen met Kelley after they both became a part of the Amherst Fourth of July Committee in 2002. He was a very active participant, and was always trying to make sure the parade went off with no hitches, and even rode his bike up and down the parade to make sure everything went well.

“Larry was somebody who was a champion of what was really right,” said Thelen. “He thought the town should have more than adequate coverage because lives were at stake. He believed patriotism and loving the country was important. If something was being covered he wanted people to know, and he never revealed his sources. He had a lot of integrity.”

Thelen believes that Kelley was a real asset to the community, and will be missed by many. “He was a friend to so many people and was always looking out for his fellow citizens,” she said. “The town was really important to him, and that is a rare thing these days. He will really be missed.”

This story will be updated as new information is released.

Devyn Giannetti and Hayley Johnson contributed to this article.