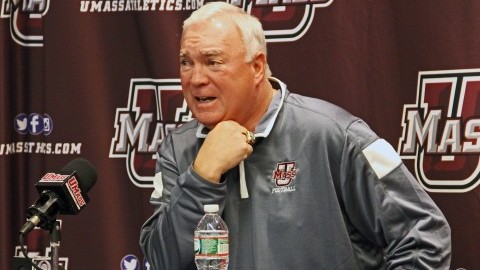 It was a celebration Wednesday afternoon in the Massachusetts Room at Mullins Center, as the Massachusetts football team announced its recruiting class for the 2017 season in a live-stream event on ESPN 3 hosted by long-time Boston sports personality Andy Gresh, and Hali Oughton.

The Minutemen unveiled 22 players from eight different states – stretching from Massachusetts to Florida all the way to California – that signed National Letters of Intent with UMass in hopes of helping the program reach a bowl game for the first time in the second chapter of coach Mark Whipple’s tenure in Amherst.

“Credit the staff,” Whipple said. “We have great people representing our school and our program. We got more length and that’s what we needed. We had to get longer and taller and add more depth. Our front line guys can play with anyone in the country, we’ve proven that.”

Of the new additions to the program, the Minutemen welcomed five defensive linemen, four wide receivers, three linebackers and cornerbacks, two offensive linemen and safeties as well as a quarterback and athlete.

“We start with our search and trying to identify good character guys and we try and sign good players,” recruiting coordinator coach Charles Walker said.

The NCAA lifted a restriction that prevented teams from flying athlete’s parents to accompany them on visits this season. Walker thinks the implementation may have been enough to get more recruits to sign on the dotted line.

“A lot of parents don’t have the means to travel,” he said. “I thought it was an important decision and the right one from the NCAA. This is a family process and it’s important to show that we have great relationships with our players.”

Throughout the presentation, the coaches alluded to getting deeper as a team in supporting the front-end of the depth chart that can bring the most change in results come next season.

“We need more depth,” Whipple said. “This class is really giving us that second level that we can compete with and overall we’ll be a better football team come Saturdays. You’re not playing with four [defensive backs] or a strong safety. That’s not a part of the game anymore. You need about 10 defensive backs ready to go, including on special teams. Now we’ve got some guys with some speed that will provide depth and be ready to go.”

UMass landed four wide receivers in Jacoby Herring, Jy’Von Brown, Patrick Voley and Melvin Hill, which is the second most of any position group.

A common theme among them is their height – both Hill and Voley stand at 6-foot-3, while Brown is 6-foot-4 and Herring rounds at the group at 6-foot-5.

“That was the focal point for us in the class,” wide receivers coach Spencer Whipple said. “With these guys, we’ve brought taller guys in that can go high-point the football.”

Director of Athletics Ryan Bamford was present Wednesday and reflected on the progress of the program since taking over two years ago.

“[We’re] almost two years in and we’ve learned a lot about where we have been and where we want to be,” he said. “We’re extremely excited about our progress to date and where we’re going.”

Whipple echoed Bamford’s sentiment, looking back on the 2016 season not as a losing one despite a 2-10 record, but as one of hard work and commitment from spring practice to the final whistle in December.

“I don’t look at it as a losing season,” Bamford said. “These guys competed hard and gave a lot of effort and made the university proud. At the end of the day, we just didn’t have the talent, but the guys got better as the season went along.”

The full class as of Wednesday afternoon is listed below:

Officially, 16 players signed letters of intent, joining nine previously declared players that joined the Minutemen at the start of the spring semester.