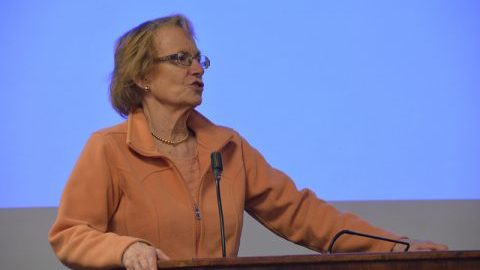 The Massachusetts Public Interest Research Group, or MassPIRG, officially launched four of its campaigns for the spring semester during an event Tuesday evening in the Cape Cod Lounge.

The campaigns address issues that affect the University of Massachusetts, the Commonwealth of Massachusetts and the country. Campaign coordinators met with new and returning students to brainstorm ways to tackle these issues.

The four campaigns for the spring semester include making textbooks affordable, 100 percent renewable energy in both Massachusetts and UMass, getting money out of politics and solving the issue of hunger and homelessness in the Amherst area.

Some of MassPIRG’s recent victories include getting fast-food chains McDonald’s, Subway and Wendy’s to pledge to halt their use of antibiotic meat.

“We, as a student body, need to realize that we’re powerful and it’s our duty to take action now on these issues we care about,” Julia Seremba, a junior BDIC major and UMass chapter chair of MassPIRG said.

Last semester, Seremba led the New Voter Project, a campaign that held events to register students and update voter information for the 2016 presidential election. According to Seremba, the project helped register over 3,000 UMass students and over 6,000 students across Massachusetts.

Seremba is an overseer to help develop plans for the affordable textbooks and homelessness campaign.

“I’m really interested in leadership development this semester and building up a team to make our organization more visible on campus,” Seremba said.

Former State Representative Ellen Story was featured as a keynote during the launch event. She stated to the audience of about 105 students that the state legislature lacks diversity.

Story encouraged the audience to know and contact their state representatives and run for political office.

“[Most representatives] don’t have a clue of who we are and what we do.”

Gabi Matthews, sophomore BDIC major and coordinator of the renewable energy campaign, stated that students suggested setting up a Valentine’s Day themed table to gather signatures for petition and write Valentine cards to the Earth.

“Basically, getting top leaders of our campus to endorse our campaign and take that to Chancellor Subbaswamy and the Board of Trustees,” Matthews said.

Phil Duarte, a junior BDIC major and coordinator for Get Big Money out of Politics campaign, suggested an event on President’s Day to collect signatures for Congressmen Jim McGovern.

“We’re going to be collecting endorsements from professors, local officials and business leaders,” he said.

Issa Sayegh, a sophomore philosophy major and campaign coordinator for the Hunger and Homelessness Campaign, hopes to work with UMass Drama Club to produce a play that advocates for the homeless.

“So, that way, people might feel more sympathetic for the hunger and homeless,” Sayegh said.

Jacob Munroe, a senior history and political science major and coordinator of the affordable textbooks campaign, wanted a focus on the Open Textbook Initiative, a program for professors to switch off from to free resources which students could print.

“Originally, I was going straight to the professors themselves, but I think it’ll make more of an impact to get students in specific classes to go to their professors,” Munroe said.

“Part of the reason I’m a physics major because I want to research new ways to improve renewable energy,” said Zachary Curtis, a freshman physics major.

Sachin Bhat, a graduate student studying computer engineering, hopes that he raised awareness of the issue of climate change. He suggested creating pamphlets containing startling climate fact to educate people the extent of the issue.

“Many people know that there is climate change, but they don’t know to what extent the climate is changing,” said Bhat.