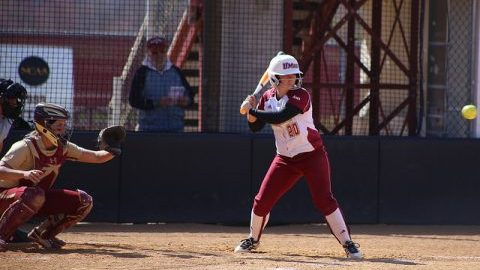 At the collegiate level, the difficult task of making it through an entire season and walking away at the end with a championship begins before the first pitch is even thrown.

For the Massachusetts softball team, the offseason has come and gone. After a 24-22, 15-6 Atlantic 10 record last season, its opportunity to start this year’s journey and put the hours of work in the gym and batting cages to use has arrived.

But the early stretch of the 2017 season won’t be an easy one for the Minutewomen, as they travel to take on non-conference opponents in three states—Texas, Mississippi and California—in a month’s time.

The first games of the season are already behind the team, as they concluded their first tournament over the weekend.

UMass returned from Florida on Monday, where it competed in the EMU Madeira Beach Invitational, garnering a 2-3 record while playing teams like Central Michigan, Oakland University and Robert Morris.

It is safe to say that getting the first one out of the way is a good feeling for the players.

“I was so happy to be playing again,” junior ace Meg Colleran said. “There’s really nothing that beats it.”

Even though they’ll be flying all over the country, Minutewomen coach Kristi Stefanoni isn’t concerned with the amount of traveling the early season is going to entail and believes that more good can come from the trips than bad.

“Road trips build a lot of great things because you’re around each other all the time,” Stefanoni said. “We make sure that wherever we go, [the players] leave their cell phones on the bus so they can actually engage with each other.”

With so many games played in such a short amount of time, it will be imperative to the long-term success of the UMass team that it maintain the health of its players, giving pitchers and catchers specifically enough opportunity to rest when the need presents itself.

“[Health] is extremely important to us. [The players] are always told to take care of themselves with treatment when they get back and then my staff and I talk about what the next couple of days will be for them in order to get ready for the next weekend,” Stefanoni said.

In the pitching circle, the Minutewomen’s starting rotation will relish the tournaments as an opportunity to get back into the groove of the regular season. With so many games to work out the early-season kinks, Colleran is looking forward to getting back into the swing of things.

In her 2016 season with the team, the North Attleboro native tossed seven complete-game shutouts and had 125 strikeouts.

When asked about her ace, Stefanoni conveyed Colleran’s irreplaceable importance to the team.

“She’s a work horse and the glue that’s going to keep our staff together. I’m just happy that we have her for another season,” Stefanoni said.

Contrastingly, Madison Gimpl, a freshman outfielder starting her first season with the team, is ready to do anything in the preseason that she can to make an impact on the field and prepare for the regular season.

“I want to compete,” Gimpl said. “I just want to help my team out in any way possible and bring whatever I can to the table.”

As an athlete from California attending school in Massachusetts, Gimpl is no stranger to copious travel and thinks that playing a variety of opponents will be beneficial for the team.

“I think it’s good to branch out and play different teams, go to different areas and really get the UMass name out there,” Gimpl said.

When UMass finishes its early test of tournament play, the team will begin conference action with three games in Amherst against St. Bonaventure, opening the regular season with a doubleheader Mar. 25.