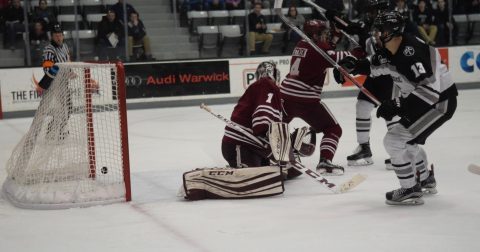 The Massachusetts hockey team was less than three minutes away from earning a tie with No. 10 Providence, with a chance to snatch a point in a game for the first time since their win against Alabama-Huntsville Dec. 30.

With PC pressuring UMass from the drop of the puck in the extra session, the Minutemen failed to clear from their own zone and Friar junior Jake Walman corralled the puck and fired a shot towards UMass goalie Ryan Wischow (40 saves) where sophomore Garrett Gamez tipped it in to end the game in heartbreaking fashion.

“It’s unfortunate,” Minutemen coach Greg Carvel said of the loss. “We took a penalty in the first minute of the game and we didn’t have the start. We spotted them a goal, as opposed to three goals last night, and then we started to play. I thought the rest of the game was pretty even.”

PC struck first when Gamez zipped a wrist shot past Wischow from the right faceoff dot at 4:46 of the first period to put UMass in an early 1-0 hole.

Unlike Friday night’s outing, the Minutemen kept the score from ballooning out of control for the rest of the way and even managed a couple odd man rushes in their favor. PC did outshoot UMass by a substantial margin in that one putting 18 shots to the cage compared to nine for the Minutemen.

Pigozzi recorded his seventh goal of the season smashing home a rebound following a shot from freshman Niko Hildenbrand. UMass again prevented the Friars from taking the lead the rest of the way, putting together one of its most impactful periods in quite some time.

A big factor in that came in the Minutemen’s penalty kill which stopped all eight of PC’s chances, including shying away 18 total shots from the Friars during those opportunities.

“They did an excellent job, really good job,” Carvel said about the penalty kill. “Niko Hildenbrand making some big blocks early was a huge part of that. I thought we did a good job not allowing them to set up very often.”

UMass was active in the shot-blocking department, getting in the way of 23 PC shots throughout the matchup.

The Minutemen kept the pace up in the final frame with Wischow making a couple highway robbery saves to keep the score knotted at one.

“It was great for [Wischow] to get a lot of shots but not a lot of scoring chances,” Carvel said. “He got to make saves and feel good about himself, and find some confidence.”

Unfortunately, UMass looked to have run out of steam in the overtime period as the Friars held the Minutemen hostage in their own zone, eventually scoring the game-winner with a tired bunch of visitors out on the ice.

“I thought we played a hell of a game,” Wischow said. “The guys played pretty solid defensively for us and they kept pucks to the outside. It’s easy to get into a game when you can control your rebounds and I was controlling my rebounds for most of the night. It was a good game. It was the story of the season for us.”

With this series sweep, the Minutemen will head back to Providence next weekend to battle the Friars in a best of three series in the opening round of the Hockey East playoffs.

“They’re a top 10 team in the country,” Wischow said on his thoughts on playing PC again next weekend. “If you play them close like this, it gives you confidence. All the guys in the room have confidence in the system – it doesn’t matter who we play if we play the way we want to play every night.”

“I’m really excited to come back here and play in this building again next week,” Carvel added.

Game times have yet to be announced for the series.