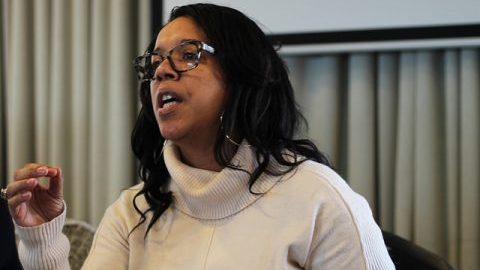 Professors of African-American history spoke on the racial, sexual and psychological violence of slavery toward black women in response to the Kara Walker art exhibit in the Commonwealth Honors College event hall on Wednesday.

The panel discussion began with Parker, who described her feelings seeing Walker’s art work as “overwhelming.”

“I started to have a visceral reaction to Walker’s artwork,” Parker said.

Parker described how the work resonated with her personally, describing her experience as a black woman as “objectified” and “silenced.”

The conversation then shifted to Pryor, who spoke on the piece titled “The Emancipation Approximation.”

Pryor began by talking about how she has a “muscle” to bear the horrifying stories of slavery and how Walker’s exhibit weakened that muscle.

She then commented on a piece which depicts a female slave being hoisted up by her genitals from a white swan, to which Pryor to compares to the feeling of your stomach churning at the top of a roller coaster.

“I felt like Walker was trying depict to me that rape feels like losing your stomach,” Pryor said.

The panel discussed the sexual violence depicted in Walker’s work. Battle-Baptiste referenced a piece which shows a female slave “performing” on a white slave master, to which she said it showed a level of sexual power in the female slave due to her being in charge of his pleasure.

Pryor said she would recommend the exhibit to her students, but only if they went to “experience” the work and not simply to see it.

Krauthamer spoke on her experience of the exhibit as something she “forced” herself to go to.

Krauthamer described Walker’s work as multi-faceted, detailing the complexities of black women during slave times, and talked about how Walker’s work forces people to question if there are more horrifying narratives of slavery than what we are already told.

Krauthamer also commented on a piece which shows the silhouette of a female salve leaving a baby behind to which she asked, “[what] if black motherhood was not the best thing to happen to a female slave?”

When questioned on the picture’s depiction of black motherhood, Krauthamer says she believes it shows both the complexities and personal agencies of female slaves.

The panel then collectively related this to the agency of black women, allowing them to be in charge of their own bodies.

After the panel, members of the audience were allowed to ask questions, and were then able to purchase books from both Krauthammer and Pryor.

“I liked the fact that they started with their own emotional response to Kara Walker’s work,” said Hazel Gedikli, a doctoral candidate. “It’s not something you hear often in scholarly conversation so I really liked the fact they did [so].”