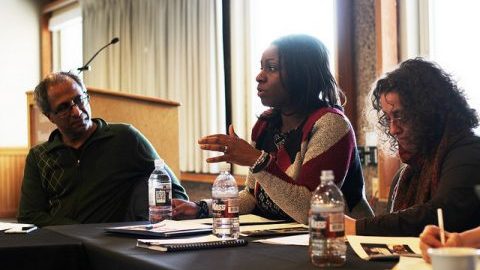 Students and faculty gathered in the Amherst Room at the University of Massachusetts Monday afternoon for a panel-led discussion on diversity within social movements and to outline critiques of the Women’s March on Washington.

The event was part of the “Engaging Democracy, Exchanging Ideas” series, was co-sponsored by the University of Massachusetts College of Social and Behavioral Sciences and the On Protest Working Group. It was led by six panelists who shared personal experiences, analysis of the march and suggestions moving forward for a national movement.

Linda Tropp, a professor of social psychology, started off the panel by speaking on the research she conducted on women who attended the march.

“I found that many people were just protesting for the first time,” Tropp said.

Whitney Battle-Baptiste, associate professor of anthropology, said she did not attend the march herself, but that her lack of participation in the march does not make her any less of a woman. She said people need to understand black women have already been “marching, fighting, screaming and yelling” about the injustices in our country.

Laura Briggs, professor and chair of the women, gender and Sexuality Studies program said as someone who organized a national march in 1987, the organization of the Women’s March on Washington was much different than her own experience.

“People didn’t mobilize because of the demands,” Briggs said. “The march did not have politics except those that people brought with them.”

Briggs explained the importance of organizers laying the groundwork for mobilization by having face-to-face conversations.

Sanjiv Gupta, associate professor of sociology, said that though the mobilization had certain problems or flaws, the event was “a heroic achievement.” She applauded the speed at which the movement quickly materialized.

Looking forward, Gupta said as academics and intellectuals continue this movement to help ordinary people, they must work across disciplines.

Anna Branch, associate professor of sociology, said women attending the march were overwhelmingly Hillary Clinton supporters and for many this was their first time protesting in the streets.

Branch said the march needed to do a better job of recognizing multiple kinds of women, calling the Women’s March on Washington the “white liberal class advantaged march.”

She said the movement cannot ignore marginalized communities and their platform.

Angelica Bernal, assistant professor of political science, spoke from her own experience as a Latina, immigrant, mother of a child with disabilities and as a person with undocumented family members.

“Our critiques of the march are important,” Bernal said.

Bernal said the virtual Women’s March, or the Disability March, allowed women with disabilities to upload pictures of themselves online and post why they wanted to march in order to participate in the marches happening in Washington and across the globe.

Alix Olson, a graduate political science student at UMass, critiqued the march for being transgender exclusionary. She said the pink pussy hats that “[equate] feminism with vaginas and uteruses” are not inclusive to all types of women.

Olsen said in order to discuss framework moving forward, organizers must acknowledge the work already started in the past, such as Occupy Wall Street, the Black Lives Matter movement and the campaign #SayHerName.

“It is clear that a resistance to a Trumpian kind of world does not begin with the 2016 election,” Olsen said.

“It showed that there is a lot contention in the movement and within those who are observing the movement… which I imagined, but it was nice to see them able to talk about it in a good atmosphere like this,” said Cole Coccitto, a junior political science major.

Arianna Lewis, a legal studies major, said she hoped someone would discuss the inherent ableism of the Women’s March and was glad to hear Bernal do so.

“I feel like a lot of conversations that I have heard about the Women’s March are either ‘this is the greatest thing that has ever happened’ or ‘no this is awful’ and I feel there is room for both of those perspectives in the conversation,” Lewis said. “I think they definitely have to all get expressed to some capacity in order to figure out how to move forward with organizational programs like this.”

Carson McGrath can be reached at [email protected] and followed on Twitter @McgrathCarson.