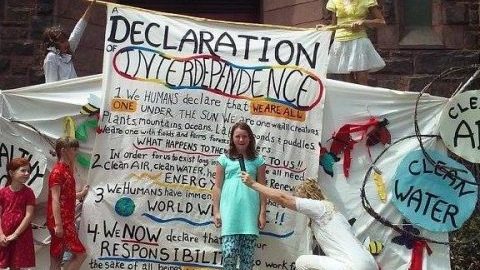 In front of the steps of Springfield City Hall Monday, a woman clad in black swayed back and forth as if in pain, clutching a plaster model of the Earth to her chest and moaned. Behind her stood a giant puppet reading “sanctuary” on its head. Half a dozen children and adults surrounded her, singing and shouting about climate change, immigration and President Donald Trump, whom they described lyrically as the “crazy white man in the White House.”

The performance was the first in a series of peaceful protests called “The World We Love” by PachaMama Puppets, a group that specializes in performance art addressing environmental issues.

In spite of the performance by the seven protesters, no one outside of the media showed up to the Springfield protest.

“It’s important [the media] is here,” artistic director Beth Fairservis said. “Our message is for the world.”

The group had also planned to give a letter to Domenic Sarno, the mayor of Springfield, asking him to make Springfield a sanctuary city, meaning a city that does not cooperate with the federal government in detaining and deporting illegal immigrants. However, city hall was closed for the holiday and neither Sarno, nor anyone else, was there.

Sarno has been on record saying Springfield is not a sanctuary city and has no plans to become one. This clarification came after President Trump’s assertion that federal funding to sanctuary cities would soon be stripped.

“It’s because they are afraid of losing federal funds … and so we’re out here addressing an urgent need to fight for this human right,” Fairservis said.

The letter also asked Sarno to direct his efforts toward creating a self-sustaining community in Springfield that utilizes renewable energy.

“Regardless of what you may hear, over 95 percent of scientists agree that climate change is now threatening the way we live,” the letter read.

Before departing with a song about sharing the earth, the protesters read aloud a “Declaration of Interdependence” asking for “clean air, clean water, healthy soil and renewable energy.”

Karen Ribeiro, who plays “Mother Earth” in the protests, said, “we should celebrate the world we love. The more we love our world, the less we will harm it.”

Ribeiro said similar rallies have been more successful in the past, drawing up to 150 people.

Ribeiro said that the Springfield performance was the first in a series of upcoming protests in Pittsfield, North Adams, Greenfield and Turners Falls. The performances will culminate in the PachaMama Puppets’ second annual “Interdependence Day” show in Northampton July 1.

A protest took place in Holyoke later on during the day. The protesters honored Holyoke Mayor Alex Morse during the performance for vowing that Holyoke will remain a sanctuary city in defiance of federal requests.