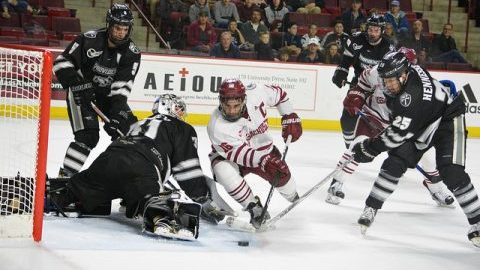 After 20 minutes of action Friday night at Mullins, the Massachusetts hockey team looked stuck in the mud.

No. 10 Providence College scored three goals in the first 10 minutes of play to take a commanding lead over UMass (5-26-2, 2-18-1 Hockey East Association) on Senior Night. Sophomore defenseman Ivan Chukarov cut the lead to two for the Friars (19-9-5, 11-7-3 HEA) at 17:35 of the opening period, giving the Minutemen some jump in their step heading into the middle frame. However, a couple UMass penalties matched up against the fifth best power play in Hockey East during the second stanza proved to be the final nail in the coffin for the Minutemen.

“It hurt, [Walman] has a hell of a shot,” Minutemen coach Greg Carvel said. “The one he scored was a laser. We outshot them 14-9 in the second period, and we’re there on the bench with the score 3-1 and we’re thinking ‘OK if we get this next one it becomes anybody’s game’. So it was a big factor for sure.”

UMass did tilt the ice in the second period, coming up with a few extended opportunities in the offensive zone, as well as two power play chances of its own, but none were rewarded with goals. In fact the opposite happened as seniors Steven Iacobellis and Brennan Baxandall each were assessed minor penalties allowing PC the extra-man chances that would ultimately prove to be the difference.

Iacobellis admitted that his penalty was a result of frustration that, among other things, boiled up from a disappointing season.

“Mine for sure,” Iacobellis said. “I’m a prime example of that, and it’s unacceptable. Those are things that just can’t happen. It’s a tough time in the game to get one of those and it’s something we just have to get better at.”

The Minutemen did limit the Friars power play (2-out-of-7) the rest of the evening, however the damage had already been done.

“I think so,” PC coach Nate Leaman said when asked if Walman’s goals were key to the final outcome. “I thought [Walman] got two looks and we were fortunate enough that they went in there.”

In what has been a familiar, yet unwelcome trend for UMass this season, the inability to string together a complete 60 minute effort has been a huge component of the Minutemen’s disastrous record.

Carvel had similar thoughts after the game.

“We took poor penalties and they scored on the power play and the last goal was a breakdown allowing them a 2-on-1,” Carvel said. “Where we’re at as a program right now, we’re far behind a team like that tonight. They’re physically stronger, compete much harder, skill level is better so if we don’t play a perfect game of what we’re capable of the score gets ugly like it did tonight.”

Seniors Iacobellis, and Ray Pigozzi finished their careers at Mullins with a point (both assists), and goaltender Alex Wakaluk earned the start (29 saves) in his final start on home ice.

“I preach to these guys you get what you deserve,” Carvel said. “They deserve to win a game…they deserve to feel good because they’ve paid a big price this year.”