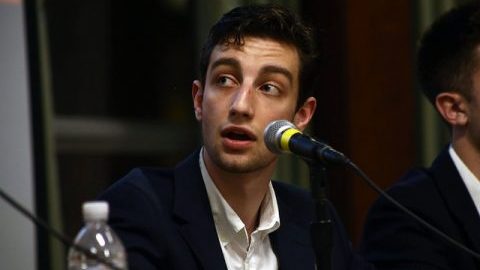 Student Government Association President Anthony Vitale and Vice President Lily Wallace are campaigning together for re-election for the coming 2017-18 school year. Vitale and Wallace have held positions in the SGA in the past, Vitale as Secretary of Finance and Wallace as Undersecretary of University Policy. Wallace was recently appointed to VP following the resignation of Nick Rampone. The two said they are feeling confident going into the week and a half allotted for campaigning, speaking about the progress they have made in their positions and the work they would continue to do if they get reelected, noting it would be the first time a SGA President and Vice President won re-election since 1999.

Last election, Anthony, you won with Nick Rampone 1,395 votes to about 1,261 votes. Do you expect this election to be close to that? What made the election last time so close?

Anthony Vitale: “To be honest, I don’t want to make any speculations as to what the outcome of the election is, but I think Lily and I are both confident in our ability as leaders within the last semester or two and that we’ve made a lot of progress. We have also been very successful in implementing a lot of the changes we advocated for, so I think our experience will speak for itself, when it comes down to election time.”

Lily Wallace: “So a big part of the SGA that people don’t realize is that when you elect a new president or vice president, pretty much after they’re elected, our focus stops being making policy and implementing change and it goes into training the next leadership team … There’s so much you need to learn and the learning curve is steep, so this would be a really great opportunity for us to have a more minimal transition and be able to really strengthen what we’ve done with the institution. We’ve had the training wheels that the other candidates can’t claim to.”

AV: “I think, just like what Lily is saying, this opportunity to re-elect an SGA president is really giving the student body a unique position … Because we’ve already been in the roles for a year, we have that institutional knowledge that is always lost when a new SGA president is cycled through.

What’s the platform you’re running on?

AV: “So I guess we have four main themes that we’re running on. One of our foremost themes is advocacy. A second theme is increasing student space and students access to space. A third theme is student voices and shared governance, and a fourth theme that we’re campaigning on is our experience.

LW: “A lot of things that we think are super important, like a very large one for us that we’ve proven we’ve been actively advocating for, is student space. Anthony has been able to open The Hatch [Eatery]. I’m a senior this year and my freshman year it was closed, so there’s just been this very large, empty, open space, and we just added 27 new RSOs [Registered Student Organizations], so there’s a desperate need for space on campus for student groups … As well as that, Anthony’s also been working very closely and actually leading the Student Union Task Force.”

AV: “This is something that every SGA administration for over five years—five separate administrations—have tried to tackle, and every single year their advocacy and their ability always gets turned down for one reason or another. But this year we’re finally at a stage in which Student Union redevelopment—so renovations to this building to make it suitable for 21st century students in our current state of the campus—will be coming into effect in the next few years.”

How are you looking at social media within your campaign?

LW: “We have a really fun Facebook page for re-election, and we’re excited to use that as a platform to just share more, because I think that a lot of people don’t understand what we really do. They’re just like ‘those are the ‘happy-duppy’ faces of the SGA, but most of our days are six to 12 administrative meetings … or emails. It’s a glamorous life, the life of emails. I honestly did not realize I could send this many emails until I got this job. So we’re hoping to use that platform to show students what we’ve been doing.”

How do your individual backgrounds play into your campaigning?

AV: “Being in the finance role, it was one my greatest experiences here at UMass, in particular because the finances of SGA are such a broad and outreaching part of the organization. We finance over 300 different student groups. We have over 3.1 million dollars. That really connects to many, many, many students and many organizations on campus.”

LW: “I think it’s almost impossible to do this job without us drawing background and understanding, because you sit in these meetings.”

AV: “It’s almost all about money. But anyways, my experience working on the finance side of things has really connected me to so many broad and so many different areas and different communities here at UMass, student groups that I wouldn’t have even known existed if I wasn’t in the finance role before.”

LW: “I’m coming from a background of community organizing. I got involved in the SGA my junior year after I had worked very closely with a couple campaigns for stopping fees and also for food justice on campus. And my studies also play a role in this because I’m a political science and civic engagement BDIC, so a big part for me was how we were going to institutionalize the change we want to see in the world … So I got involved with the University policy last year. I was an undersecretary, and I was offered the secretary position, but I turned it down at the time, because I really enjoyed doing the work but didn’t think at the time that it was the right place for me to be.”

Do you think Nick Rampone’s resignation and your relatively recent appointment, Lily, have hindered your campaigning efforts going forward?

LW: “No way, shape or form. I respect Nick a lot and I think he’s a great guy, and I think that because I’m coming from within, I know a lot of people here from a lot different places, so I was really able to step up and fix and finish some of Nick’s projects. And Anthony and I, we come from very different backgrounds, but for some reason we work very well together, because we just both want to see the best for all the students on campus.”

AV: “You just explained it really well. We both come from different backgrounds and we both have different ways of looking at things, but we really ultimately have the same goal and that’s to better the lives of students on campus.”

I know you went into the role trying to help SGA relationships with student organizations, improving those relationships, and you talked briefly about campus diversity too, but also LGBTQIA issues, can you elaborate on that?

LW: “I think it’s especially important right now that we do this kind of advocacy work. So I’m doing this work actually for a class. I’m doing a history of policy related to gender inclusion. I’m working with my professor in the hopes that the research that I’ve done will be pushed into policy at the university and creating more gender inclusive housing on campus … That’s something I’m working on as one of my personal projects.”

Something that’s gotten a little more attention is the sanctuary campus movement and your involvement on the newly established task force. Do you think that’s big going into this campaign? Because I know there are lots of students who are either dissatisfied with the SGA or with the administration.

LW: “I think the people who are dissatisfied with the SGA don’t know [or] understand what SGA is.”

AV: “Let me put it this way. I think that the recent actions on immigration are extremely problematic and I think everybody on campus agrees, whether it be the administration, the SGA, the general student body, whatever.”

I mean, most students recognize that you guys — you, the SGA, as well as the administration – [say] that, but are just curious about the actions going forward:

AV: “I was also the co-sponsor to a motion before [SGA] Senate, denouncing the executive orders, outreaching to our legislative representatives, our senators, our congress-people and our governor as well, which mentioned their advocacy on the behalf of those affected and what we’d like to see become of it. And also, we’ll be sitting on the immigration task force that has been recently implemented by the chancellor. But at the same time, I think … we really need to provide adequate education on what a sanctuary campus actually entails and compare that to what the chancellor has already implemented and promised.”

LW: “After the chancellor sent out his first email, we wrote a letter from the SGA to the Chancellor saying, ‘This wasn’t enough.’ And then within two days after that, he sent out a different email. He actually pushed through res-life, making sure all these resources were widely available to students… For us, we’re trying to make sure that the resources are as widely spread around these things, so people know what’s happening and they know how to get connected.

What is your favorite thing about each other?

LW: “I think what’s really great about Anthony is that he’s just a good guy. There are a lot people who want to do things out of ambition, out of pride, and I just do not see that about him.

AV: “What I appreciate most about Lily is her incredible work ethic and her desire to really affect change. I can call her—I do—at literally any point in the day or the night to call about some SGA thing that happened, a development, you know, something that we need to work on immediately, something Lily needs to get done. We’re constantly on. We’re constantly working.

Jackson Cote at [email protected] and followed on Twitter @jackson_k_cote.