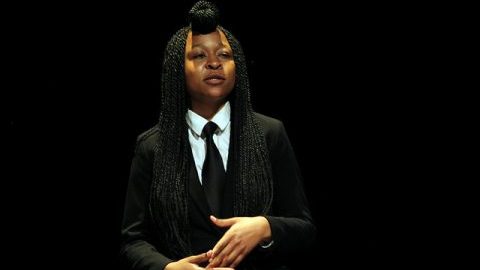 Freshmen Student Government Association (SGA) Presidential and Vice Presidential candidates, Nathalie Amazan and Timmy Sullivan, are looking forward to the upcoming SGA elections and are hopeful people will see how much they have to offer, despite the fact that they have been on campus for less than a year.

Here’s the transcript of the question-and-answer in preparation Sunday’s SGA executive debate from 6-8 p.m. in the Commonwealth Honors College Events Hall.

What are you currently involved with on campus outside of SGA?

Nathalie Amazan: “I work at [The Stonewall Center], I am the Speaker’s Bureau’s co-coordinator … [Timmy and I] are founding members of the newly formed UMass Prison Abolition Collective. So, those are the two things I like to say that I’m really active in right now … [The UMass Prison Abolition Collective] started after the “13th” documentary screening that I think, it was November … in the Malcolm X Center. It’s basically just a group formed out of watching that documentary and seeing the issues that mass incarceration has on communities of black and brown folks, so we’re just trying to do our work to end it, and I guess radically abolish prisons.”

Timmy Sullivan: “I would definitely say that it’s been a privilege to work with Lily Wallace this past semester. About all the candidates in general, they’re all really dedicated to the campaign and to all their SGA initiatives and efforts, which I think definitely makes us better candidates as well, because it really is forcing us to think about issues and where we stand.”

What has your experience been like with this campaign?

TS: “Oh, it has been incredible so far.”

NA: “Yeah, I am so excited … It’s just exciting being able to have this platform to be able to talk about these issues. I’m really looking forward to the debates especially, so that’s where we’ll get really nitty-gritty into the actual issues and what we can do on campus to solve them.”

What kinds of projects and ideas would you want to implement granted you get the position?

TS: “Nathalie and I are both currently undersecretaries of sustainability … The campus already is committed to sustainability and we have incredible projects that we’ve been privileged to work with Ainsley [Brosnan-Smith] the secretary of sustainability with. But, just furthering our commitment and the SGA’s involvement as a whole entity with sustainable infrastructure around campus, creating a zero waste culture … is one of my personal goals with sustainability.”

NA: “Just shifting from that to just like protecting, or representing minority and marginalized students … right now I’m on the social justice and empowerment committee in the SGA, and one thing that we’re starting is reforming CCPH, the Center for Counseling and Psychological Health. So that’s something that, if I get this position I want to definitely make a huge priority, because a lot of the horror stories we hear about CCPH, and how people aren’t really getting the help that they need and they deserve. CCPH, reforming the Women’s Health Clinic as well, similar to CCPH, it’s understaffed, not really representative whatsoever. Working with Student Bridges to recruit and retain more students of color, because right now I think there are only … there’s 896 undergraduate African-Americans at this campus, which is absurd. So just working with them and any other organization who is willing to do that work with us is a huge priority.”

TS: “Within the building as well, you can’t get around like at all from floors. You have to exit the building to move floors if you’re in a wheelchair, which we think is horrible.”

NA: “And working with the sanctuary campus movement as well, in any way that we can help … [they are] definitely the most vulnerable students right now.”

TS: “We also want to create a more transparent student government. We’ve recognized, even though we’ve only been here for a year, that a lot of public perception about the SGA is that it’s just a bunch of political science majors looking to boost their post-grad résumé, which we think is an awful representation of students who are supposed to represent the student body. So a program we’re really interested in…restructuring the way the outreach and development committee conducts outreach, to create more of a liaison program between cultural [Registered Student Organizations] and just all RSOs in general to come in and feel as though they have space within the office to communicate things that they’d like to see around campus.”

What has been your favorite thing about working with each other?

TS: “I love Nathalie, she’s my best friend … it’s such a privilege to meet [Nathalie]. In all honesty though, Nathalie makes me grow every day. She’s constantly challenging me intellectually, emotionally, philosophically and I can just feel myself growing as a person every day because of her.”

NA: “Timmy honestly inspired me to switch my major from computer science to political science and just opened me to what I actually love… [He] challenges me literally every day. Every day we have some sort of debate or discussion about something and it’s just nice to have that person who’s always there to stimulate you mentally … it’s nice.”

Did you know each other before coming to UMass?

TS: “No. We met maybe like the second week of school…”

TS: “Oh my god I can’t believe you know that off the top of your head.”

TS: “Wow. I’m so impressed. Our photographer who took the pictures of us introduced us. As soon as we met each other we just like fell into this huge conversation and became best friends the next day.”

How do you feel about the lack of experience you may have in comparison with some of your opponents that you’re running against?

TS: “Actually, I don’t think we are inexperienced. I think a lot of people are hiding behind the argument that our age automatically disqualifies us as candidates. However, we are two of probably the most active senators in the SGA. We dedicate countless hours a week to the student government. Personal backgrounds included … I think honestly people just hide behind the argument that we are too young or that we don’t have enough of the bureaucratic experience within student government. I previously applied for the vacant vice president position, I thoroughly vetted it. Nathalie and I have talked about what this position will mean for our dynamic, for our time, our schedule, projects. Honestly I think people are underestimating how qualified we are and how much we really think we can succeed.”

Do you have any concerns about the time it may take to train and assume the position?

NA: “I just think we are multifaceted in the issues that we decided to put as our platform, while other candidates, we don’t really see them doing that. They’re kind of afraid to make bold political statements and we aren’t really afraid to do that.”

TS: “I think honestly it’s just, the biggest issue for us is that we feel people are underestimating us, or not necessarily taking our campaign as seriously as they should be, but it’s all out there, we’re as transparent as it gets. We’ve outlined not only our five-point platform, but subsections of that platform, with really specific points, and then how we are going to address all of those points. And we’re conducting meetings to follow through with these projects even if we don’t win the election. Like we have intentions to meet with disability services and talk about wheelchair accessibility, to meet with Student Bridges and look at what recruitment and retention of minority students looks like. These are issues that we actually care about, and I think that that authenticity is really transparent in a way that other candidates can’t communicate.”

Hayley Johnson can be reached at [email protected], and followed on Twitter @hayleyk_johnson.