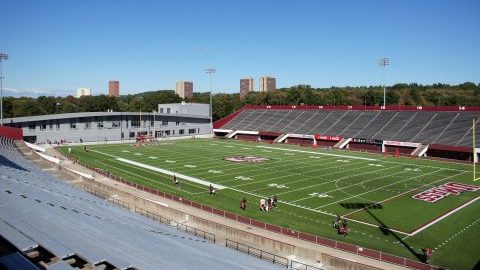 The Massachusetts football team is set to hire its next defensive coordinator.

According to a report from the Daily Hampshire Gazette, former Western Michigan assistant coach and defensive coordinator Ed Pinkham will replace former Minutemen coach Tom Masella. Masella was fired this offseason after three seasons with UMass.

The Western Michigan defensive ranked 49th in FBS in total yardage in 2016, allowing 353 yards per game to its opponents and 19.5 point per game. With Pinkham as defensive coordinator, the Broncos ranked first in total defense in the Mid-American Conference and led the league with 15 interceptions. The Minutemen allowed an average of 35.5 points per game and 453 yards in their contests last season.

Pinkham was a candidate for the Western Michigan head coaching vacancy after P.J. Fleck left for Minnesota following the Broncos’ perfect regular season. WMU fell to Wisconsin 24-16 in the Cotton Bowl.

UMass has yet to make an official announcement regarding the decision.