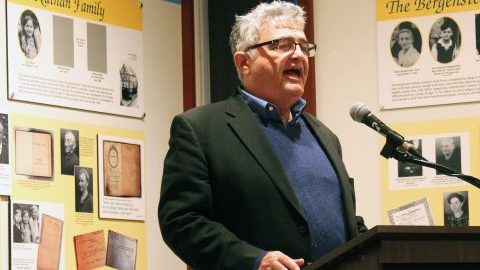 Samuel Kassow, a professor of history at Trinity University and author of several books, spoke Thursday evening in the Institute for Holocaust, Genocide, and Memory Studies. Kassow spoke of his first-hand experiences with Jewish journalists in the Warsaw and Lodz ghettos, the subject of his most recent work.

The talk, titled “In Those Nightmarish Days: Ghetto Reportage as Witnessing,” is a segment in a series of studies conducted by the Institute on “modes of witnessing,” done by exploring methods of documenting and remembering the past.

Kassow, introduced as a “rock star historian,” spoke on the mode to which he has committed extensive study, reportage.

Defined by Kassow as “artfully narrated but factually truthful,” reportage rose in post-war times in Europe in the 20th century. When documentation cannot tell an entire story, reportage allows for emotion to fill in the cracks.

Kassow focused most of his lecture on Peretz Opoczynski and Josef Zelkowicz, two journalists who used reportage during their time in the Warsaw and Lodz ghettos.

The title of Kassow’s recent book “Who Will Write Our History?” alluded to the ambition of the two journalists to write their own narrative and not leave it in the hands of the Nazi Germany.

The narratives and attitudes in the ghetto were different than what would be heard after the war had ended.

“Had historians shown interest in ghetto archives,” Kassow commented, “they would have understood the mass psychology, the mood swings, that prevented resistance.”

Zelkowicz’s reportage was defined by his use of time.

“A minute by minute, hour by hour, record of how Jews in the [Lodz] ghetto began to realize what was going to happen to them” said Kassow. In this way his archives recorded more than facts and were a documentation of shifting emotions.

Opoczynski, the journalist in Warsaw, entered the ghetto having already lost his two children and wife. He clung to the belief that most people were decent and good. His writings were marked by developed characters that he lived with in Warsaw and on an irony that brought his gruesome situation into perspective. He was occupied with the lack of resistance that he saw in his community.

“Our end has come, we’re facing annihilation, and no one has the courage for resistance,” Kassow read from Opoczynski’s book, “The Ghetto Mailman.”

Ironically, Kassow, raised by two Holocaust survivors in a Yiddish speaking home, started his career determined not to study the Holocaust and Judaism. As he delved further into his career he felt the need to document the stories he had grown up hearing over games of mahjong. His work has preserved the stories of these victims as they told them.

Lily Abrahams can be reached at [email protected]