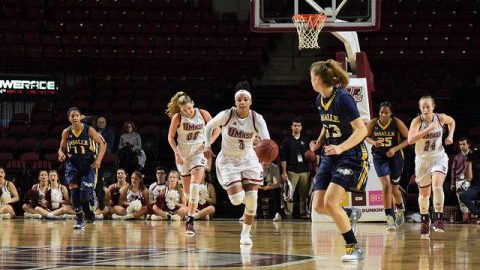 Before tip off against La Salle Sunday, the Massachusetts women’s basketball team, faculty and family honored its two seniors, Alyx Stiff and Megan Burke. The pair was called to center court with their families to be acknowledged for their dedication and commitment to the program.

Though the Minutewomen (9-19, 3-12 Atlantic 10) were only supposed to have one senior this season, the surprise addition of soccer star Megan Burke doubled the senior presence on the team.

“We were in a desperate situation,” UMass coach Tory Verdi said. “Our roster numbers were dwindling.”

After sending an email blast throughout the athletic department, Verdi recalls Burke’s name consistently being brought up. Her competitive drive, positive attitude and work ethic made Verdi’s decision a simple one, extending a spot for her on the team after her first walk-on practice.

“It’s just as special,” Burke said when asked what is felt like to have a second Senior Day. “You just enjoy the moment and take it in.”

Senior Day saw another last-minute defeat against the Explorers, similar to the first meeting Jan. 25. The Minutewomen saw both games slip through their fingers in the final quarter of play, losing both games by a combined nine points.

Being such an important game, Burke played just five minutes in the team’s second to last game of the season.

“I just have fun,” Burke said. “Senior night is always a good time for everyone.”

Stiff, on the other hand, played 32 minutes, scoring four points and adding two assists and two rebounds. Verdi said, “her ability to stretch the defense and knock down shots,” will be what he misses most about her.

The two lone seniors highlight the program’s rebuilding stages. The lack of player depth has plagued the Minutewomen all season long with eight of their losses being determined by six points or fewer.

“I think there’s a direct correlation, with a majority of our losses,” Verdi said. “You have teams that can go eight, nine, even ten [players] deep and we go six [players deep].”

Verdi gives his players credit where it’s due, acknowledging that playing under such conditions takes a toll on the body.

“We’re unable to sub where we need to,” Verdi added. “It obviously affects us on both sides of the ball.”

The fatigue is noticeable in the box score with La Salle outrebounding the Minutewomen 43-29. The Explorers also dominated second chance points, 19-2.

Though the most pressing statistic of the game correlates to both team’s bench points. The visitors had 42 of their final 57 points stem from their bench players. Sophomore Jessica George anchored UMass’ sole two points for reserves.

“Fatigue has been an issue for us all year long, when we don’t have numbers,” Verdi said. “You look at what they’re able to do with points off their bench and what we’re able to do.”

“It’s an area we’re going to address in the off-season.”

Mollie Walker can be reached at [email protected]  and followed on Twitter @MWalker2019.