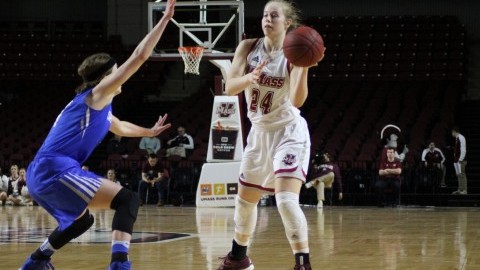 Trailing 28-12 after the opening 10 minutes, the Minutewomen (9-15, 3-8 Atlantic 10) finished the first half on a 10-2 run that closed, SLU’s lead that ballooned as high as 19 to just eight heading into the locker room, despite having 10 first-half turnovers.

“Tonight we definitely went up against a team that was very skilled,” UMass coach Tory Verdi said. “They’re 18-5 for a reason, they can shoot the ball, pass the ball, and dribble the ball. They’ve got skill sets.”

Guard/forward Hailey Leidel exceeded the Minutewomen’s freshman all-time scoring record, finishing with total of 17 points on the night surpassing the 400-point mark on the season. The freshman guard/forward attacked the basket all night and managed to complete two three-point plays.

SLU lived up to its rank amongst the conference’s best, shooting 9-of-16 from behind the arc in the first half and not producing a single turnover until there was 4:51 left in the second quarter.

The Billikens began to pull away in the third quarter highlighted back-to-back steals converted into fast break layups by junior Jackie Kemph (14 points, eight assists), extending their lead to 15 with 6:06 to go in the frame. The Minutewomen tallied an additional nine more turnovers in the third quarter, finishing the game with 21.

The fourth quarter didn’t do UMass any favors as the Minutewomen opened the frame with nine consecutive missed field goals. They ended up finishing 2-for-16 from the field in the final quarter of play.

SLU ran a up-tempo style of play was on display as it scored nine fastbreak points compared to UMass’ zero. The Billikens also dominated in the paint, outscoring the Minutewomen 30-20.

“For whatever reason we didn’t control the controllable, we didn’t do the little things,” Verdi said. “We looked disinterested.”

UMass captain and center Maggie Mulligan completed her 17th double-double of the season, leading both teams with 22 points, and 14 rebounds. Leidel wasn’t shooting to her usual potential and went just 1-for-7 from behind the arc.

“I think we need to keep doing what we’re doing,” Leidel said. “We need to have a ‘what’s next’ mentality.”

Verdi compared the Minutewomen’s style of play to their 81-50 loss against Saint Joseph’s Jan. 7. Though obviously disappointed, he remained focused on figuring out how to overcome this now five-game losing streak.

“We have to compete,” Verdi said. “If you don’t compete for 40 minutes, you don’t put yourself in a position to win games. Because that’s a controllable.”