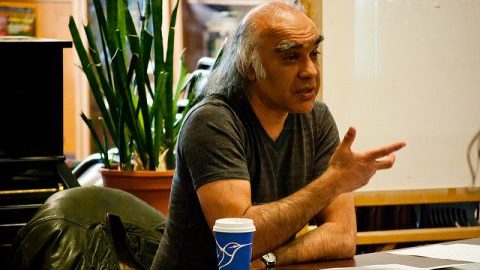 When Kyla Walters’ student thought she accused him of racism, he furiously stood up, red-faced and fuming, and insisted that his answer to a question on the latest sociology test was correct. The question: why is there an “achievement gap” between black and white students? The students answer: that parents in academically underperforming families do not value education.

“I made a massive mistake. I used the word ‘racist’ to explain that answer and why it was wrong,” said Walters, a teacher in the UMass sociology department and Ph.D. candidate. Walters said her and many students felt nervous during the outburst, and that she even feared for her safety.

Even teachers like Walters, whom students write rave reviews about on sites like ratemyprofessor.com, encounter sticky topics in the classroom that can anger or impassion students.

This encounter was one of many examples brought up during a talk on Thursday, Feb. 2 titled, “Teaching Controversial Issues” hosted by Kirsten Helmer of the UMass teaching institute.

Walters and Professor Sut Jhally of the communication department and Dr. Megan Lewis of the theater department participated as panelists, sharing their strategies for tackling controversial topics.

“I start by trying to form a real relationship with each student,” said Walters, who has since learned from the negative interaction with her student.

She added, “I also try explaining things logically and succinctly, so that the conversation is successful and fruitful.”

“Because I know what it was like to live in a world where the majority of my brothers and sisters were dehumanized in the name of little white girls like me, it’s been my life’s work to wrestle with what white supremacy means,” said Lewis. “It’s vital that we emphasize the history of that issue, otherwise we are just ostriches with our heads in the sand.”

Although Dr. Lewis takes an historical approach to teaching subjects like white supremacy, the talks still can get quite emotional. She shared that such topics have made white male students feel attacked or ashamed in the past. However, to prevent this, Lewis uses what she calls “radical empathy.”

“That young white student who felt attacked, I practiced radical empathy. I told him ‘I understand that you feel alone’ and asked him to tell us why he felt that way,” she said.

Lewis explained that giving the student a platform to explain a potentially unpopular view not only prevented a shouting-match, it also gave the student a chance to analyze and understand his own opinion.

Like Walters and Lewis, Jhally also stressed the importance of understanding the history and opinions of any issue.

To him, talking about the Israel-Palestine conflict has been especially difficult, and at times he has been afraid of being called a racist or anti-Semite.

However, he says that students only need to study the past hundred years to really understand both sides of the conflict.

“I will never tell [students] what to do or think. My job is to help [students] understand whatever the situation is, to help them think in the most analytical way possible and to make moral, ethical, and political decisions based off of that for themselves,” said Jhally.

From Jhally’s point of view, there are many issues that do have a definite “right and wrong view.” He says that thinking in an analytical and historical way will often guide students towards the “right” point of view.

Dr. Lewis was in agreement, but pointed out that students will occasionally dig in their heels, unwilling to accept a new, and “correct,” points of view.

A 2005 and 2006 study by political scientists at the University of Michigan supports this.

The study found evidence suggesting that when political partisans were presented with evidence contrary to their beliefs, they seldom changed their minds. In fact, they usually became more entrenched in their views.

“When this happens, it’s not about changing minds, but helping that student think through their own opinion, asking ‘why do they believe it?’” said Lewis.

All three panelists agreed on the necessity of teaching controversial issues. If not to find that correct answer to a question, then to better understand others’ worldviews.

The discussion ended with panelists answering questions from the audience.

“In the post-election context, I think it’s important that we talk about these things, so you know you are not alone, but also important to recognize that we are an institution and should have an institutional response to such things as well,” said Jhally.

Jhally had earlier commented on the post-election atmosphere saying, “This is the end of a long process of neo-liberal reform, and the future could be democratic or authoritarian, but it’s a choice we have to make. To talk about and understand the situation is the main, radical, controversial thing we can do.”