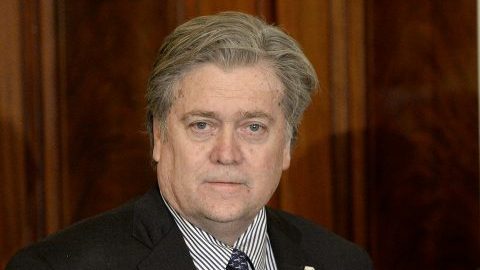 In his first two week as president, Donald Trump has faced no shortage of resistance and outcry. From the Women’s March, to protests regarding his ban on immigrants from certain countries, President Trump has definitely had his hands full. While Trump has been receiving the lion’s share of the blame, many of those protesting Trump seem to be neglecting a more dangerous character lurking in the background: Steve Bannon. If you watch the signings of executives orders, he’ll be there, standing on the edges of frames and out of the sight of many cameras. But while the cameras show him on the sidelines, he is center stage in Trump’s frame of mind.

For those who don’t know who Mr. Bannon is or what he stands for, I encourage you to read Tess Halpern’s article, “Use Words to Describe, Not Diminish,” for an in-depth look. Steve Bannon is a founder of the right-wing news organization Breitbart News, a safe haven for the so called alt-right, and has served as the executive chair of the website. A former Breitbart editor-at-large describes him as “A vindictive, nasty figure, infamous for verbally abusing supposed friends and threatening enemies,” who changed the course of Breitbart News to “Openly embrace the white supremacist alt-right,” or a mix of racism, white nationalism and old-fashion populism. As you can imagine, when word broke that he would serve as the chief strategist to the president, fear grew.

It recently came to light that Mr. Bannon and senior advisor Stephen Miller, an equally chilling figure, wrote President Trump’s inaugural address, despite the president’s claims that he wrote it himself. With this recent news, it is quite concerning to think about what exactly the phrase “America first” means. Some argue it’s nothing more than a call to become more realist in the field of international politics. But given Mr. Bannon and Mr. Miller’s past, it is far more likely that this may be a dog whistle for white nationalists.

Digging further into Mr. Bannon’s past reveals a trail of concerning quotes, such as this 2013 quip from an interview with the Daily Beast. “I’m a Leninist,” he said. “Lenin wanted to destroy the state, and that’s my goal, too. I want to bring everything crashing down, and destroy all of today’s establishment.”

And in a more disturbing interview on Nov. 18, he told the Hollywood Reporter, “Dick Cheney. Darth Vader. Satan. That’s power. It only helps us when they [liberals] get it wrong. When they’re blind to who we are and what we’re doing.” I hope I can speak for everyone in saying that anyone whose goal is to bring down the state and whose role models are Darth Vader and the Devil is not someone who should be two states near the president, much less two doors down in the White House.

This past week Mr. Bannon has been at the forefront of the Trump Administration, sharing their desire to quiet the media, and even went so far as to suggest that the media should “keep its mouth shut.” It appears as if Bannon hates the negative press toward the new administration, despite his own history as a member of the media.

On Jan. 29, the White House announced in a shocking press release that the Chairman of the Joint Chiefs of Staff and the Director of National Intelligence will no longer be regular members of the National Security Council and will be replaced by Bannon. The nation’s top soldier and spy have been replaced by a man who relishes the idea of power and wants to destroy the establishment. From now on, the two displaced members will only be on the council when their expertise is needed. Which, one would think, would be every meeting.

In one week, President Trump has created a great deal of divide in the country with controversial executive orders, and yet many seem to forget the seeming mastermind behind it. I suspect that despite Mr. Bannon’s attempt to evade media attention, the cameras will still be able to capture him influencing the most powerful man in the world. Bannon, the man who transformed Breitbart News into a xenophobic, misogynistic propaganda site is now one of the most powerful policy influencers in the United States.