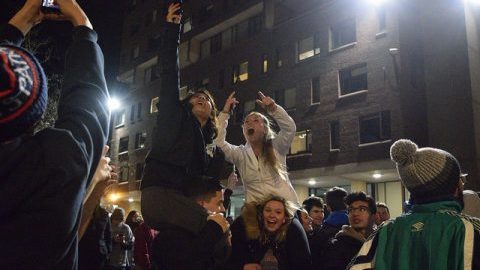 Let me paint you a word picture:

You are sitting on the run-down futon that your older brother handed down to you after he went to college, sitting as still as possible because it makes creaking noises every time you shift your weight and if you move around too much it might just break underneath you. The smell of the wings order that took two hours to get delivered is filling the air. There are empty cans everywhere because walking the four feet to the trash bin is a non-starter. But none of that matters because James White is three yards, two yards, one yard away from the end zone. The ball crosses the plain, the Patriots win the Super Bowl yet again and Tom Brady gets that fifth ring. Chills run down your spine and you’re screaming with a reckless disregard for quiet hours. You turn to your friends in a blitz of fanatic euphoria, looking to jump all over each other and just go nuts. But they aren’t there. They’re in Southwest Residential Area and you live in Central.

So what do you do? The Super Bowl guest policy prevented you from watching the game with your friends. Now the game is over and you need to celebrate but they aren’t around. So do you throw on pajamas and go to bed?

Yeah right. You and everyone under the moon are heading to Southwest to practice our right “to peaceably assemble on public property.” Looks like the revised guest policy didn’t prevent a thing except to stop you from getting to watch the game with your friends.

I understand why the rules exist. In 2015 when the Pats beat the Seattle Seahawks, the gathering at the University of Massachusetts made headlines. When excited people do stupid things in large groups while wearing UMass maroon, all of our degrees become worth a little less. I agree with the first half of the rules: “No non-UMass students will be permitted to visit the residence halls.” I totally get that; I don’t want non-UMass students coming here with impure intentions. But the second half of the rules, only getting to sign in guests from your residential area, was a bizarre and ineffectual response to Super Bowl XLIX. Having seen the constitutionally mandated peaceful assembly of celebrating students in action, I can imagine the opposing word picture that may have inspired the guest policy, the one that partly came true:

You are in Southwest after the Pats fought for the greatest comeback in Super Bowl history. You peaked in high school, probably. I know I did. Above you, there is a shining beacon. It’s a lamp post, but you don’t see a lamp post. You see glory, immortality. Life, liberty and the pursuit of happiness in physical form. In an alcohol-induced moment of clarity, you see that you don’t just want to climb it, you need to climb it. Thus, you become a hero of the mob and a target for beer cans, avocados and whatever other projectiles this University’s resourceful students can get their hands on. Naturally, ladies and gentlemen with shields on their faces and badges pinned to their chests arrive on horses to get you down, but the officers cannot stop you from taking a football to the face, falling several yards, landing on someone and breaking their ankle. You make the headlines, UMass makes the headlines, and in a week, after the high of winning the Super Bowl wears off, it stops being funny.

The thing is, none of the tomfoolery and shenanigans that were had on this beautiful Sunday evening were prevented by not being able to go to other residential areas to watch the game. Peaceful assembling, or gatherings, happened anyway. There must be a better way to keep our students and our campus safe. My roommates and I didn’t get to watch the Super Bowl with some of our friends and that’s just a big, needless bummer. When the Pats arrive at the Super Bowl next February, I hope that this won’t be the case.