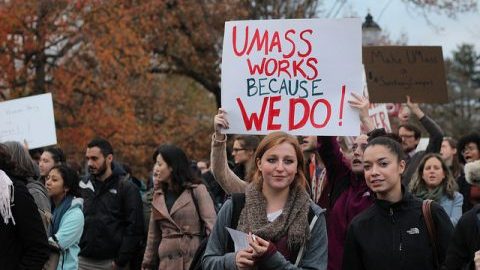 The UMass Sanctuary Movement will be hosting a student strike this Friday in the Student Union from 10 a.m. to 3 p.m. in order to help establish the University of Massachusetts as a sanctuary campus and a direct action community.

According to the group’s Facebook page, “we the students of UMass Amherst will not attend class and opt instead to educate ourselves on resisting the continued and intensified oppression immigrants face in the United States.”

“We want to establish a community of people at UMass that’s able to disrupt ICE (Immigrations and Customs Enforcement) agents,” said Anna-Claire Simpson, a Ph.D. student in the English department and one of the organizers of the strike.

The strike will feature multiple speakers throughout the day who intend to provide different perspectives on the issue of immigration in the U.S.

According to the group’s Facebook page, the strike will begin with a walkout at 10 a.m., followed by an art workshop from Ph.D. student Cecilia Vasquez, a poetry reading from Ph.D. student Andrew Torres, a Latin American intervention lesson from assistant professor of history Kevin Young, a lesson on direct action networks from the Pioneer Valley Workers Center, and a lesson on communalism from Ph.D. student Eleanor Finley.

“[The strike is] a powerful way for us to build our communities against Trump,” said Brock Parent, a UMass junior studying social thought and political economy and anthropology. Parent is also one of the organizers of the strike.

“I’m hoping it’s an educational and empowering event,” said Simpson. “The Muslim ban directly affected quite a few of our students.”

The UMass Sanctuary Movement was started by Simpson on Nov. 12, when she helped organize a walkout directly following the election of President Donald Trump. Over 600 students and community members attended the walkout, which strove to show solidarity with undocumented immigrants. It was part of a nationwide movement which included over 100 college campuses.

“We want to hold our university up to protect all of our students,” said Parent.

Stefan Geller can be reached at [email protected] and followed on Twitter @StefanGeller.