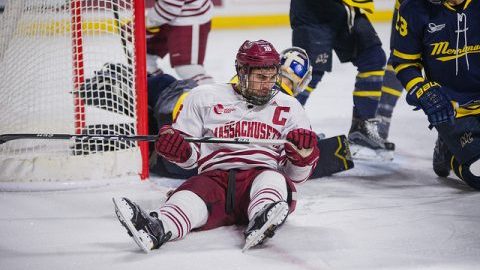 If something can go wrong with the Massachusetts hockey team this season, it usually does.

Before the game even got underway, the Minutemen were without one of their top offensive producers since senior Ray Pigozzi was ineligible to play due to a one-game suspension handed down by Hockey East. Then, 17:19 into the game, sophomore Austin Plevy was assessed a game misconduct which took him out of the contest, forcing UMass to play without another one of their goal-scoring catalysts. Mid-way through the third period, captain Steven Iacobellis looked to have broken through with a goal, however it was waived off for goalie interference, thus completing the trifecta of bad luck for the Minutemen.

As has been the case for quite some time now, nothing seems to be going UMass’ way after yet another loss –its 12th straight- and Minutemen coach Greg Carvel feels these tough times are simply another building block on the path to success.

“I feel strongly that’s part of our process here,” Carvel said. “Let’s deal with it, let’s get mad about it, let’s dig deeper”.

However, Carvel did admit that certain breaks, whether it be with the referees or throughout the game, seem to be piling up against UMass.

“Yeah it’s kind of going that direction,” Carvel said. “Things are kind of stacked against us, not just the opponents, it seems to be more than that right now.”

The Minutemen were shutout for the third time this season (the other two coming against Notre Dame and American International), and only managed 22 shots on the Warriors (12-13-5, 6-7-5 HEA) goaltender Collin Delia.

The power play unit for UMass had another woeful performance going 0-for-2 managing zero shots, and the penalty-kill wasn’t much better finishing 1-for-5, surrendering 11 combined shots on those chances.

“They clogged up the middle pretty good, played the body and played [us] tight,” Iacobellis said regarding what Merrimack did to limit their offensive pressure. “It was just finding a way to get in there and get in front of the net.”

Undeterred by the ill-fated results and bad breaks, and also staying consistent with his overall message this year, Carvel was happy with his teams’ fight in this one.

“Credit to our guys, they play hard the whole game and they don’t stop,” Carvel said. “I thought in the third period we finally started winning more battles, moving the puck better, and getting more time in the offensive zone. If that goal would have stood half way through the third period, then maybe we would have found a way to get back into the game and find a way to tie it somehow.”