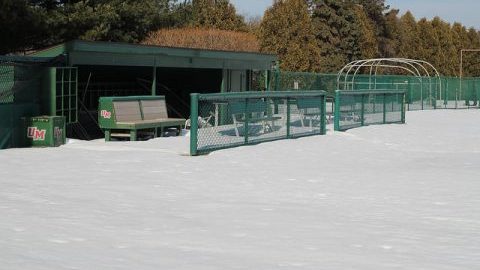 It’s the fourth week in February and Division I baseball kicked off nationwide a week ago. In Amherst, the rest of the Massachusetts baseball team jogs into a hardwood gymnasium to begin practice. UMass’ regular season starts in two weeks, but the team likely won’t step on a baseball diamond before then.

With a foot of snow slowly melting away on the Minutemen’s Earl Lorden Field and limited turf availability, this is largely how UMass will prepare for Opening Day weekend when it faces Elon  Mar. 3-5 in North Carolina.

“We practice indoors so we don’t get a chance to play before we start playing games that count,” Stone said. “In Major League spring training, they play 30-plus games before they’re playing the regular season. It’s a big difference.”

In addition to the confined practice circumstances early season baseball entails in New England, additional reasons outside of the team’s control result in a start to the season 14 days after the first Division I games are played.

“For budgetary reasons, we are not able to play for the first two weekends,” Stone said. “That’s major. It takes a while for you to catch up. You need at-bats as a hitter, you need innings as a pitcher.”

Now in his 30th season as UMass’ coach, this is nothing new for Stone. While this week Massachusetts will see 60-degree weather, New England isn’t so amiable for pitchers and catchers to work on their craft on the diamond at this time of year.

Although nothing replaces live baseball on a college regulation-sized field, there are supplements the team uses to maximize their preparation for live game action in March.

“We work upstairs in Boyden [Gymnasium], where there are six basketball courts and we do live situations. We also scrimmage at Amherst College at their cage field house so we get live situations there as well without an outfield,” Stone said. “You do all you can to simulate, we go outside and get on the lacrosse field and get fly balls and pop ups on a nice day if it’s not too cold. We just try to simulate situations that we can.”

However, there are some situations that can’t be simulated. As Stone eluded, live at-bats can’t be replicated in a gym or a tunnel. The hitter’s pre-season workouts are confined to the batting cage, meaning the first time the Minutemen will face a pitcher from 60-feet-6 inches will be on Opening Day.

In addition to the weather, Earl Lorden’s grass surface makes it more difficult to practice in the early months of the season.

“Being from the north it would be a lot easier if we had turf,” Stone said. “We would be on it now. We’d be on it today if we had a turf field. We would have been on it last week. It would be a big advantage.”

Stone likens the dynamic this situation creates to playing a game of catch-up. Live competition is irreplaceable, and truly the only way to tweak how the team performs in the moment of a game is repetition. To raise the level of competition, the Minutemen put out there time in and time out, they need to take advantage of these early season matchups to improve.

Most importantly, the conditions represent a challenge to remain in positive conference standing and within striking distance, as the season progresses, not a season-ending roadblock.

“You just try to not make a big deal of it, it’s the way it is, you can’t change it,” Stone said.  “We just try not to dwell on it, do what we can to get ready to go from there. We need to be tough mentally and physically.”

UMass won’t play a game outdoors in Amherst until Mar. 28 when it hosts Northeastern. Until then, a gymnasium is the tool Stone and the Minutemen have been provided with to remain competitive.