UMass baseball looks to bounce back from disappointing 2016 season 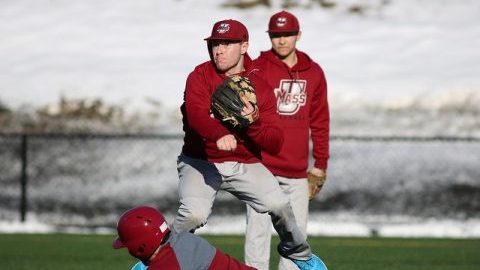 The Massachusetts baseball team, coming off of a disappointing 2016 campaign that resulted in an 18-27 record, is coming into the season with much optimism and hopes of a fresh start. However, the first two months of 2017 haven’t been all that kind to UMass, as injuries have already begun sprouting with opening day still more than a week away.

For Minutemen coach Mike Stone, who enters his 30th and final season in the dugout, he believes his group of young pitchers are ready to overcome the obstacles of the injuries that have already burdened the pitching staff

“We have good, young kids who are going to earn innings early,” Stone said. “Unfortunately, we are banged up with [our] older kids, so they will have to take advantage of them being banged up.”

The Minutemen enter the new season with 10 underclassmen pitchers, each of whom is hoping for an opportunity to see time early this year. Though UMass is returning seven players who pitched last season, only Ryan Moloney, Kevin Hassett, Ryan Venditti and Mike Geannelis are upperclassmen. Moloney was the best of the group, posting a 3.49 earned run average in 11 games.

Stone is going to rely on his underclassmen to provide innings. Sophomore Justin Lasko, who Stone referenced as being in consideration to be the Minutemen’s opening day starter, went 4-1 with a 4.19 ERA in 10 games started a year ago.

On the other hand, UMass’ starting lineup is littered with upperclassmen. The Minutemen are returning seven of their top 10 players from 2016. Top hitters Mike Hart, Geannelis, Jon Avallone, Dylan Morris and Brett Evangelista are all returning to the lineup.

“I hope it means that they will provide good leadership,” Stone said. “We need leaders and they fill vital roles so hopefully they can be good, positive leaders.”

The infield will consist of Geannelis along with utility players Cooper Mrowka and Matt Hosman, who will get opportunities when Geannelis is pitching.

Second base might be the most questionable position for the Minutemen heading into 2016. Senior Bryce Maher and sophomore Alec Norton appear to be the two guys manning the position this season. Norton went hitless in his 11 his at-bats last season, while Maher hit just .103 in 39 plate appearances.

At shortstop, Ryan Lever looks like he will get the nod, while senior Avallone will start at third base for the second straight season.

The outfield might be the most productive spot for the Minutemen lineup, as power hitter Hart, Morris and Evangelista, barring injuries, will be the top three outfielders for UMass with sophomore Dylan Robinson filling in when needed.

Catcher and captain John Jennings’ leadership, defensive presence and offensive production will not be easy to replace. Matt Bare and Andrew Noonan have big shoes to fill heading into the season, as neither had much success in 2016.

UMass will once again begin the season on a long road trip. Its first game is Mar. 3, as Elon hosts the Minutemen for a three-game set in North Carolina. The Minutemen’s first home game will be Mar. 28 against Northeastern, as 21 of their first 22 games will be on the road.

“Of course we are [at a disadvantage],” Stone said. “We won’t be playing for the first two weekends but we don’t dwell on it. We just need to go out and play.”

UMass will play defending Atlantic 10 champion Rhode Island on the road May 5-7 while they play A-10 favorite Saint Louis April 13-15 at Earl Lorden Field. The mixture of youth in the rotation and veteran leadership in the lineup should bring about an intriguing season for a group of returning players eager for a chance to bounce back after a disappointing 2016 campaign. Injuries, however, might hamper the Minutemen from taking that next step forward.

Tyler Fiedler can be reached via email [email protected] or followed on Twitter @Tyler_Fiedler.