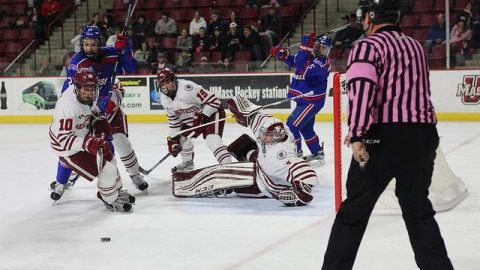 The first 35 minutes of the Massachusetts hockey team’s third game against rival No. 6 UMass Lowell had gone much like the previous two match ups between these two teams. Unfortunately, that gave way to mental lapses and defensive breakdown leading to a 5-2 loss for UMass.

The River Hawks held a 1-0 lead with 3:05 to go in the second period keeping the second highest scoring offense in the conference relatively quiet. That all changed when freshman defenseman Shane Bear was called for interference with just over five minutes left in the middle frame.

UML’s Connor Wilson scored on the ensuing power play just eight seconds after the penalty was called – his fifth of the season.

“The first goal was a power play where the shot hit our goalie right in the chest,” Minutemen coach Greg Carvel said following the game. “Then the puck falls right on our guy’s tape and he misses it. Then they shot into the empty net. It’s frustrating.”

Bear would then get called for a game misconduct following the goal as he ended up spending an additional 10 minutes in the penalty box.

Just 23 seconds after Connor’s goal to put the River Hawks up 2-0, UML extended the lead to three as Joe Gambardella scored his 15th of the season.

“It was just a defensive break down,” Carvel explained. “It’s frustrating for me because it was a situation that we discussed at length. We go into the game and it’s breakdown that we taught during the week.”

The third goal appeared to be aided by UMass goalie Ryan Wischow (19 saves) having to fight off of a screen from his own teammate. Unable to gain clear vision on the shot Gambardella was able to bury his shot from just inside the right faceoff circle.

The second period would wind to a close as the River Hawks took a 3-0 lead into the locker room as the damn holding back the UML attack had been broken in the last three minutes of the period.

After being held to just five shots in the entire first period, the River Hawks doubled their output with 10 in the second period – a large chunk of that coming from a barrage in the final three minutes.

Up until that point in the game, Wischow was having a relatively easy night in net with the exception of a 2-on-1 break away leading to UML’s first goal and having to turn away a couple of shots from point blank range to keep the game close.

The Minutemen would ultimately out shoot the River Hawks on the night, but Carvel is convinced that UMass may have been lucky in that respect.

This makes it a season sweep for UML over the Minutemen for the second straight season. The Minutemen have now lost seven games in a row to their in-state rival and eight of the last 10.