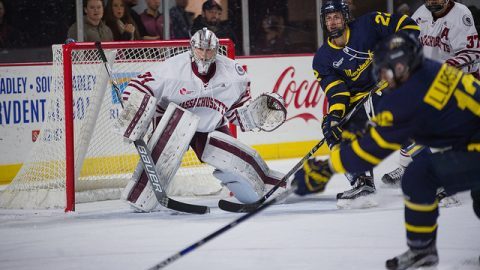 For the Massachusetts hockey team, Tuesday night’s home game against Merrimack College was a lot like spending Valentine’s Day single (at least for the first two periods). UMass’ (5-24-2, 2-16-1 Hockey East Association) 3-0 loss to the Warriors (12-13-5, 6-7-5 HEA) featured little drama in front of a relatively quiet crowd at the Mullins Center.

“In the first 40 minutes, they made it very tough for us to generate much,” Minutemen coach Greg Carvel said following UMass’ loss. “Our compete level at the beginning of the game wasn’t where it needed to be, and that allowed them to get ahead early. We weren’t able to maintain any momentum until the third period.”

Already down 1-0 late in the first period, Minutemen sophomore forward Austin Plevy was ejected following a big hit on Merrimack defenseman Ryan Cook over center ice that sent Cook off the ice for the remainder of the period. Cook would later return to the game.

When asked about the impact of losing Plevy so early had on the team, Carvel seemed unfazed.

“I didn’t mind it tonight. It allowed me to throw three guys together, and if I had to double shift somebody that way, and if somebody was going I would double shift him,” Carvel said. “The style of the game tonight helped make it so I didn’t mind it. I usually do because it’s a pain to just juggle the lines but tonight it wasn’t a huge factor.”

“Luckily we got some guys I feel like I have some chemistry with all around the lineup. We have some good players so it wasn’t too hard to adjust. I thought those guys really stepped up and did a really good job tonight.”

The ensuing five-minute major against the Minutemen with less than three minutes left in the period led to a Warrior goal scored by defenseman Alex Carle less than 30 seconds into the penalty extending the lead to 2-0.

The Minutemen offense amounted to very little through the first 40 minutes with just 10 shots on goal as opposed to Merrimack’s 26 shots.

The scoring chances were even harder to come by for UMass, with Iacobellis getting the Minutemen’s best chance of the game in the latter half of the second period. Iacobellis’ shot came from right in the slot but ultimately turned away by Warriors goaltender Collin Delia (22 saves).

Johnathan Kovacevic tallied Merrimack’s third goal of the night roughly five and a half minutes into the second period burying a shot from the top of the right faceoff circle to put the game out of reach 3-0.

The Warriors first goal came eight and a half minutes into the game, with forward Brett Seney scoring his ninth of the season. Seney would finish the night with two points after adding on an assist in the second period.

Fighting back in the third period

Although UMass still struggles to put together a full 60 minutes, the third period seemed to be where it started coming back to life as it finally broke free from the choke hold that Merrimack had in the first two periods.

“We’ve been so close, not that we were close tonight, but tonight in the third period we could have just gone through the motions but the kids played hard right to the very end,” Carvel said. “The energy was great on the bench.”

Unfortunately this sudden surge that included 12 shots on goal – the Minutemen finished with 22 on the night – didn’t amount to the kind of comeback that UMass was hoping for.

What looked like a major momentum shifting goal scored by Iacobellis with 12:20 left in regulation ended up getting called back due to goaltender contact.

What could have ignited the Minutemen ended up being as deflating as the opening two periods, and the unlucky break signaled the end of any possible comeback for UMass.

The Minutemen will look to end the now 12-game losing streak on Saturday when they host in-state rival UMass Lowell at 7 p.m.

Nicholas Souza can be reached at [email protected] or followed on Twitter @nicksouza27.