UMass hockey falls to No. 10 Providence on Senior Night at the Mullins center 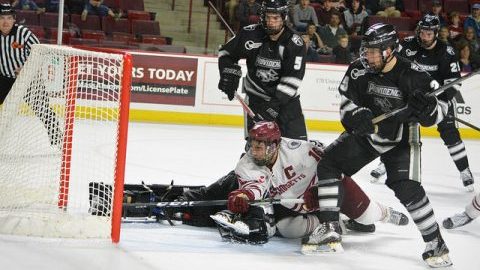 The Massachusetts hockey team suffered many of the same problems on Friday night that they have all season, all of which led to another frustrating result for the Minutemen (5-26-2, 2-18-1 Hockey East Association).

Following the 6-2 loss to No. 10 Providence College, UMass has now lost 14 straight games as the Hockey East tournament fast approaches.

After sophomore defenseman Ivan Chukarov scored with 2:25 left in the first period off of a one-timer at the top of the left faceoff circle to bring the score to 3-1, the Minutemen came alive and stabilized themselves after a very poor opening 10 minutes.

Unfortunately for UMass, the second period was marred by untimely penalties that the Friars (19-9-5, 11-7-3 HEA) capitalized on.

Junior Jake Walman (three points) scored a pair of power play goals in the second to extend the lead to 5-1 and ultimately put the game to bed after just two periods.

The first goal from Walman was a laser shot from the point on the power, followed by a goal during a 5-on-3 with 5:50 left in the period.

While the hole got bigger in the second period for the Minutemen, the digging started in the first eight minutes as Providence took an early 3-0 lead.

“We stressed all week that we were going to play the hardest working, most physical team in our league and that we needed to be prepared,” UMass coach Greg Carvel said of the Minutemen’s poor start. “We weren’t. The first 10 minutes were embarrassing [with] the way we allowed them to score.”

The first Friar goal came as a result of a mental lapse by UMass as a Minutemen defender attempted to clear the puck from the defensive zone only to have it intercepted in the slot by Providence’s Shane Kavanagh giving the right winger a wide open shot at the net to go ahead 1-0.

Just over three minutes later Friar freshman Spencer Young buried the second goal off of a pass from forward Erik Foley to extend the lead to two.

Finally, at 7:57 into the first period center Scott Conway scored what would prove to be the game winner for Providence as the lead went to 3-0 and Carvel was forced to call a timeout.

“I called a timeout and basically told them there are no secrets in hockey,” Carvel said. “You need to outwork and out-will your opponent, which is all they were doing to us. I thought the rest of the way we settled down and competed.”

While UMass junior defensemen Jake Horton managed to score from near the blue line just 33 seconds into the third period to make it 5-2, it proved to be a garbage time goal.

Friar freshman Josh Wilks scored his 11th goal of the season to put the final touches on the Providence victory with 5:45 left in the game.

Following the game, the Minutemen seniors and coaching staff shared a moment on the ice and was able to reflect on the tough journey they’ve gone through to this point.

Senior captain Steven Iacobellis had a heartfelt statement in the press conference following the game as he looked back on the career he has had at UMass.

“I want the younger players: our freshman, sophomores and juniors that are here now to see and feel some of the pain that we’re feeling from this. That they can see it and know that they don’t want to feel this. I just want them to work harder so this isn’t them. I think they’re starting to get it.”

“For this senior class their mark on this program was to help turn the tide,” Carvel added. “That was the challenge to this group. I think tonight is a sign of it. I’m proud because I feel this team competes hard, and that has to be step one of the turn around. [Iacobellis] is a big part of that. He plays hard every night and he’s a gritty kid that wants to win. He leaves it all on the ice.”