UMass hockey forced to play catch up after shaky first period against No. 3 Boston University 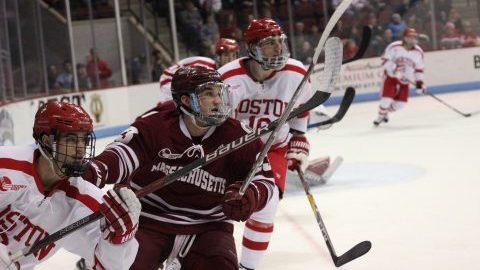 BOSTON- Watching the Massachusetts hockey team in the first period of its 3-1 loss to No. 3 Boston University was a lot like watching a boxer fighting two weights above his class.

No matter how hard UMass (5-21-2, 2-13-1 Hockey East Association) fought back, BU (18-7-2, 11-4-2 HEA) had an answer. Every punch thrown by the Minutemen was returned by the Terriers with double the force, as UMass was lucky to reach the first intermission down by just two goals.

“ I can’t put my finger on it,” Minutemen coach Gregg Carvel admitted. “I thought we were in a good place coming into tonight. We played really hard for 60 minutes these past three games and I expected that to carry over into tonight.”

UMass freshmen forward Niko Hildenbrand taking a slashing penalty just four seconds into the game could’ve been a microcosm of what the rest of the period was going to by like for the Minutemen as they appeared to be playing as if they were a man down for the majority of the first 20 minutes.

A big reason for the score only being 2-0 after the first was the play of freshman goaltender Ryan Wischow (42 saves), who stopped 20 of 22 shots in the period.

Wischow spent most of the first period on constant alert as UMass was out shot 22-8. while having to fight through screens on most of those shots.

“I thought he was really strong for us tonight, and we needed it,” Carvel said. “There were a lot of shots on net, especially in that first period, and kind of stabilized us tonight.”

The first goal scored by BU’s Clayton Keller from the slot was helped in part by one of those screens obscuring Wischow’s view.

Like the lighter fighter in boxing match, the few shots that the Minutemen managed to take against the Terriers was to no avail as they were turned away by goaltender Jake Oettinger (28 saves).

The second period saw a complete 180 in almost every aspect of the game for UMass.

The Minutemen were aided in the second with four penalties on the part of BU, giving UMass multiple chances to get back into the game.

The Minutemen capitalized midway through the third period with a power play goal from senior Ray Pigozzi (his sixth of the season). Pigozzi managed to deflect a shot from the point by freshman Shane Bear.

“For sure after that (goal) we were (playing) better than we did all game,” Pigozzi said. “But at times we slipped back into old habits and that’s what I think ultimately hurt us in the end.”

Like the seemingly overmatched boxer who finally managed to land a blow on a more powerful opponent, UMass began to play like it believed it could compete with one of the nation’s best teams.

Now skating with more energy, speed and purpose the Minutemen flipped the ice in their favor giving Wischow a much need break. UMass actually managed to win the shot battle in the second period 10-7.

Given this game turned out to be a loss, the Minutemen might be left to do some soul searching in order to figure out which team they really are. The team that looked overwhelmed in the first period, or confident in the second.