UMass hockey hits the road this weekend with games against Northeastern, No. 9 UMass Lowell 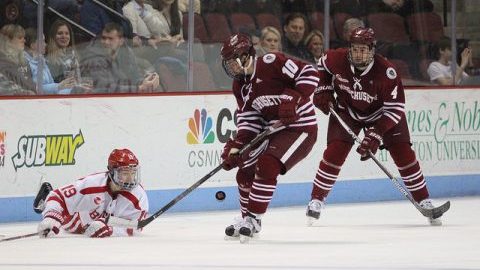 The Massachusetts hockey team will be in action for the first time after a week-long break as it hits the road to face Northeastern Friday, and No. 9 UMass Lowell Saturday.

However, NU was riding a three-game win streak coming into the previous matchup. The Huskies enter Friday having lost back-to-back games while defensively they have allowed 15 combined goals in their last three games, including the last game against the Minutemen.

This could leave the door open for playmakers like senior Steven Iacobellis, who managed to score two goals in the Jan. 31 meeting.

“I think Northeastern’s strength is [its] offense and obviously [it] scored six goals [last week] and [its] weakness is [its] defense,” Minutemen coach Greg Carvel said. “You don’t want to get in a run-and-gun game with them like we did because they have the ability to score a lot of goals.”

As it was in their first meeting, the Huskies enter Friday’s game with the top scoring offense in the Hockey East, averaging 3.61 goals per game. This coupled with the best power play in the conference—27.4 percent—presents essentially the same challenge as last week.

“We need to be disciplined and stay out of the penalty box and not allow their power play, which is one of the best in the country, to be as big of a factor as it was last game.”

Both Sikura and Gaudette rank among the top five players in the conference in points this season, and will be a challenge for the UMass on defense again come Friday.

Another short turnaround for the Minutemen

UMass is coming off of four games in the span of seven days, and following this past week off, it is heading for another tough part of the schedule with three games in five days beginning Friday. After this weekend’s pair, the Minutemen will host Merrimack next Tuesday.

UMass will need all the energy they can get, as they will follow up Friday’s game with another against UML (17-9-3, 9-7-1 HEA) on Saturday.

The River Hawks trail only the Huskies in scoring offense (3.59 goals per game) as well as power-play percentage (27.3 percent) in the conference.

However, the last time these in-state rivals met at the Mullins Center Jan. 14, the game was a physical grind with few scoring chances to be had on either side. The Minutemen fell 2-1 in a game that took on almost the exact opposite tone than that of the game against Northeastern.

Puck drop for Friday’s game is set for 7 p.m. at Matthews Arena, followed by a 7 p.m. start Saturday at Tsongas Center.