UMass hockey prepares for third and final match-up against No. 6 UMass Lowell on Saturday 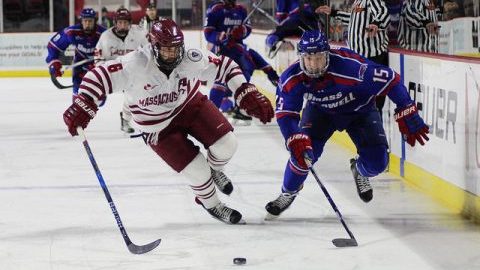 The Massachusetts hockey team will be wrapping up its three-game season series against No. 6 UMass Lowell Saturday at Mullins Center.

The River Hawks already won the Alumni Cup after defeating the Minutemen (5-24-2, 2-16-1 Hockey East Association) for the second time this season Feb. 11. This will be the third meeting of the season for these in-state rivals.

Even though UML (19-9-3, 11-7-1 HEA) has beaten UMass in both meetings so far in this season, it has not been as lopsided as one might expect given the discrepancy in conference and national standing this season.

A rebuilding Minutemen squad under the leadership of first-year coach Greg Carvel has only allowed six goals to one of the best offenses in the Hockey East.

“I think they’re a very successful team when it comes to running their systems,” Carvel said. “They’re a very structured team, but if you can stick to your game plan and defend properly you can keep the game close and I think we’ve done a good job of that these last two games.”

The River Hawks average 3.58 goals per game, trailing only Northeastern in that category in Hockey East and have scored a total of 111 goals this season, which ties them for third in the nation.

Carvel pointed to special teams as a big part of UML’s offensive success.

“I think their power play is outstanding. It really doesn’t surprise me that they’ve scored over 100 goals, and I wouldn’t be surprised if half of those goals came from the power play.”

While it isn’t quite half, the River Hawks have scored 39 of their 111 goals with the man advantage, which is good for third best in the nation. UML’s power play percentage is also tied for second at 27.3 percent.

The Minutemen have fallen victim to the River Hawks’ skilled power play as two of the four goals scored in the last meeting with UML came via the man advantage—three of the combined six goals have been scored on the power play.

Avoiding the penalty box has been vital against the River Hawks all season, and figures to be no different Saturday. UMass had seven penalties called against it in the last meeting with UML, but Carvel was more frustrated with the circumstances of the calls.

“I thought we did a good job avoiding those penalties,” he said. “The referees made a few of those calls up, but it’s frustrating when your team does everything it needs to do compete and the refs take it out of your hands.”

The familiarity with the River Hawks makes this match-up a little different than others, as UML is the only team that the Minutemen will face for a third time in the regular season.

This is also a rare situation in scheduling for UMass, as it will not have a Friday game, giving the Minutemen an extra 24 hours to prepare.

“We’ve spent a day putting Tuesday’s game to bed,” Carvel said. “Now we’ll be able to hyper-focus on this game over the next two days. I expect this game to be similar to the previous two where we’ll have to be very good to keep it close.”

Puck drop is scheduled for 7 p.m.