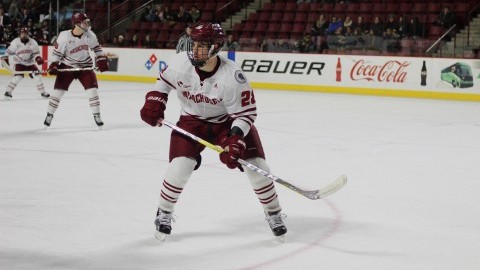 The whirlwind of the mid-season Hockey East schedule continues for the Massachusetts hockey team as it travels to the state capital Friday to take on No. 3 Boston University.

The Minutemen are fresh off a 6-5 loss against Northeastern on Tuesday, but it was arguably one of the best games UMass has played all season, as it tied its previous single-game high of five goals versus the Huskies. The Minutemen last scored five goals in their 5-4 win over Notre Dame Dec. 2.

According to UMass coach Greg Carvel, it was a continuation of a positive trend that his team has been on since last weekend’s series against Maine.

“I think these past three games we’ve played with better energy and we’re getting to the net more,” Carvel said. “We scored a few goals [against the Huskies] by getting bodies to the net and cleaning up rebounds.”

Carvel has been adamant through most of the season that if the Minutemen were to produce more offense, it had to be via those “dirty” goals down near the net off of rebounds.

UMass also scored its first power-play goal of the New Year against NU on Tuesday courtesy of defenseman Jake McLaughlin.

Unfortunately for the Minutemen, BU is bringing the best scoring defense and penalty kill in the conference on Friday.

Currently the Terriers are allowing an average of just 2.08 goals per game – fourth best in the country – to go along with a penalty kill percentage of 87.1, which is tied for fourth nationally.

While UMass just had one of its most productive nights offensively, BU will present a much stiffer challenge as the Terriers average 3.12 goals per game. For Carvel, the strategy on offense will see little change in spite of that.

“It’s been a real focus for our team lately, getting pucks and bodies to the net,” Carvel said. “I know [the Terriers] have some really talented players on the defensive end that make it difficult to get to the net, but that will still be our focus.”

Playing four games in the span of a week – including games against the top-scoring offense in the conference followed by the top-ranked defense in three days – and having three of those four on the road is just part of playing a Hockey East schedule. While Carvel makes no excuses for the Minutemen, it still presents an extra layer to the already challenging task of playing against the nation’s best on a weekly basis.

“It’s about being able to manage [our players’] energy,” Carvel said. “Knowing when to give players days off and keeping our practices brisk so we can keep their energy levels up.”

While energy could be a concern for UMass, it can still hang its hat on the momentum of its five-goal performance on Tuesday.

“Hopefully it’ll give them some confidence,” Carvel said. “It reinforces to the guys that if they get to the net and they get pucks to the net, then they’ll get rewarded.”