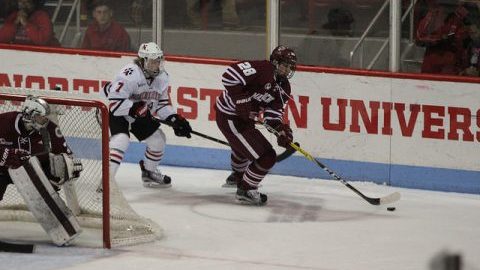 BOSTON – Trips to the city of Boston haven’t been kind to the Massachusetts hockey team this season. The Minutemen (5-22-2, 2-13-1 Hockey East Association) now are 0-for-4 on trips to the state capital following a 6-2 loss to Northeastern Friday.

The Minutemen had a rough start to the game to say the least. The Huskies (12-12-5, 6-9-3 HEA) won the opening faceoff and scored just 16 seconds in with junior forward Nolan Stevens scoring his first of two in the period.

NU would go on to score the first four goals of the game, leading 4-0 with just under three minutes to play in the first period. Stevens (two goals) book-ended the opening run for the Huskies with forwards Dylan Sikura (one goal, one assist) and Adam Gaudette (one goal) each tallying a goal in the period as well.

“We do some really stupid things that allow 2-on-1s and 3-on-1s and shoot it off our own shin pads for the first short-handed goal,” UMass coach Greg Carvel said of the Minutemen’s play after the game. “We do a lot of stupid stuff. We try hard, but we don’t try very smart.”

However, the Minutemen did manage to build momentum right before the end of the first period with a goal from defenseman Jake McLaughlin – his second of the season – scoring within 90 seconds before the first intermission as both teams headed to the locker room with the Huskies leading 4-1.

“It helped. One thing about this team is they continue to play,” Carvel added. “They don’t give up. Nobody’s surprised we scored at the end of the first period and if we hadn’t I think we could have come out in the second and continued to just try, but we don’t play smart.”

That momentum carried to the second period with a goal from freshman Griff Jeszka – his seventh of the season – less than three minutes into the period to bring the score to 4-2. Jeszka managed to accomplish what Carvel has been preaching all season – cleaning up a rebounded puck resting right near the goal line.

Unfortunately, that momentum was killed on the lone power play for UMass that could have been an opportunity for the Minutemen to get with one goal, but ended up being one of the many tough breaks for UMass.

The short handed goal came off the shin pad of a Minutemen defender – although the goal was credited to senior Zach Aston-Reese – as it dribbled past Wakaluk to give Northeastern a 5-2 lead.

That goal could be seen as a microcosm of the kind of night that UMass was having.

“It was ridiculous,” Carvel said. “We got pick-pocketed behind the net, and we shot it off our own shin pad into the net. Any momentum we had that pretty much put a knife right in it.”

Aston-Reese completed his four-point performance (two goals, two assists) with a goal in the final minute of the second period, which put the final nail in the Minutemen’s coffin.

UMass will look to rebound on Saturday against No. 9 UMass Lowell and try to end its current 10 game losing streak. Puck drop will be at 7 p.m. at Tsangus Arena.