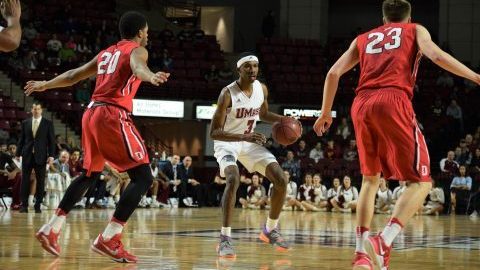 Sometimes in basketball there are simply talented players who can take over the game on a whim. Guys like Stephen Curry, Russell Westbrook and LeBron James are perfect examples of that prototype of a transcendent player at the next level.

None of those NBA all-stars were on the court Saturday afternoon at Mullins Center for the Massachusetts men’s basketball team’s game against Davidson, but Wildcats guard Jack Gibbs was and he did his best to emulate what those stars do on a nightly basis. The senior came through in a big way for Davidson (14-11, 7-7 Atlantic 10) as the Wildcats went topped UMass 79-74.

Gibbs scored 24 points in the first half and he ended up with 32 by the time the final buzzer sounded.

For Minutemen coach Derek Kellogg, he is all too aware of the effect Gibbs can have on a game when he’s locked in.

“It reminded me of last year where he did the same exact thing,” Kellogg said of the A-10’s leading scorer. “He made two or three that were like probably bad shots that are good shots when they go in.”

UMass’ (13-14, 3-11 A-10) only lead came on the first basket of the game, but the Minutemen were able to keep the game close during most stretches of the contest and even gave Davidson a scare cutting the lead down to three on two separate occasions in the last 30 seconds.

Kellogg was impressed with the fight that his team showed, especially when they were down in tough holes to come back from.

“We obviously made a few plays, not only down the stretch, but throughout the course of the game where they were able to get a little bit of a cushion that was tough to come back from,” Kellogg said. “Even until the last five seconds, three seconds, our guys brought it. They brought some good energy, some good intensity.”

Coming into Saturday’s matchup, a major focus for UMass had to be slowing down the duo of Gibbs and forward Peyton Aldridge. The teammates are two of the three players in the A-10 averaging over 20 points per game on the season.

Aldridge did go for a double-double, but it wasn’t due to efficient shooting. The 6-foot-8 junior scored 15 points and 13 rebounds, but he struggled from the field shooting just 3-for-18. His main exploits came from the free-throw line, where he knocked down a game-high seven free throws.

A player on the Wildcats that wasn’t expected to make much of an impact was forward Andrew McCauliffe. Coming into the game, he was averaging just 1.3 points per game and 1.1 rebounds per game. Despite his struggles, the senior more than exceeded expectations Saturday going for 14 points.

Kellogg thought the Minutemen gave the Davidson big men too many easy opportunities down low and that cost them dearly during their comeback attempt.

“One time he sets a ball screen, we kind of get caught up on Gibbs and he dives and gets a dunk,” Kellogg said of McCauliffe. “Two times I think it was Brison [Gresham] that left him and just left the basket kind of naked or open or whatever you want to call it. Those are big plays when it’s going to be a four or five-point game. We tend to do a couple of those a game.”

Despite the loss, there were some positives for UMass. Chief among them was the play of point guard DeJon Jarreau, who scored 18 points and had nine rebounds. Jarreau did turn the ball over eights times on the day and he elected to focus on that after the game.

“I had eight turnovers and it was all crazy turnovers trying to make the homerun play instead of just trying to chip away a little by little,” Jarreau said. “So I just have to get better at that and just keep playing my game and trying to run a team and match my coach’s intensity so we can start trying to turn this thing around.”

For the Minutemen close losses like Saturday have become commonplace and this one hurts just as much as the others have.

“A loss is a loss. Whether you lose by 40 or you lose by 2 so that hurts,” forward Seth Berger said. “But there are some bright sides and we obviously improved but like I said there’s still and L in that column.”