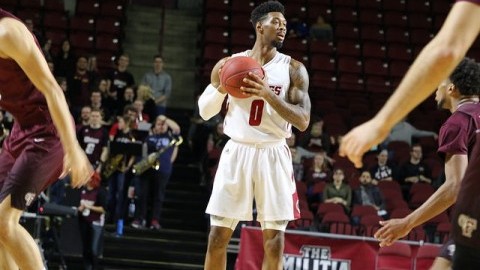 Johnson came into the game seventh in the Atlantic 10 in scoring, averaging 17.3 points per game and 11th in rebounds with 6.1 per game. His ability to play inside and outside provided a mismatch for UMass it thought it had contained early on.

For the first half, the Minutemen (12-11, 2-8 A-10) did exactly what they sought out to do. The 6-foot-7 swingman did have a team-high five rebounds in the half, but was contained offensively, with only seven points.

The second half was a completely different story for the redshirt junior as he scored 21 points, upping his game-high total to 28 while also adding 11 rebounds to complete the double-double as La Salle (12-8, 6-3 A-10) topped the Minutemen 88-78 at the Tom Gola Arena in Philadelphia.

UMass controlled the first half with a 39-34 lead after the first 20 minutes and were strong throughout the first few minutes of the second half, but it was a technical foul called on center Rashaan Holloway early in the second that turned the tide of momentum to the opposing side. With 15 minutes, 23 seconds left in the game, La Salle took a 47-45 lead that it would not surrender.

Minutemen coach Derek Kellogg admitted that the call had a large effect on the momentum of the game.

“It was the exact same thing that happened when I watched the George Washington-Rhode Island game last night. [GW] got a technical on the bench and all of a sudden Rhode Island pulls away,” Kellogg said in his postgame interview with WEEI Springfield. “I’m not clear on exactly what he said. I didn’t get clarification on exactly what he said. I guess he was giving some banter to Paul (referee) and that was the turning point in the game.”

The Explorers were able to put UMass away with their free throw shooting down the stretch of the game. La Salle finished the game shooting 92.3 percent from the charity stripe with a 24-for-26 mark.

“My biggest thing in the halftime speech was telling the guys to keep them off the free-throw line,” Kellogg said. “If you can keep them out of the one-and-one, they have to work for baskets. We never got into it. We got into the one-and-one with a minute and a half let in the game, when it was over.”

Despite the loss, the Minutemen did see some bright spots on Wednesday. Holloway had a big game for UMass, taking advantage of the smaller, guard-centric lineup of the Explorers lineup to rack up a team-high 19 points and seven rebounds. Donte Clark (12), DeJon Jarreau (12) and Zach Lewis (11) all scored in double digits for the Minutemen.

Jarreau’s play, in particular, stood out. The freshman has usually struggled to find success in the first half, but against La Salle he reversed that trend, scoring seven points in the first 10 minutes of the game.

His play in the second half was still somewhat strong, but foul trouble and a late turnover has Kellogg hoping for more consistent play moving forward.

“[Jarreau] did some stuff and I know those guys are still freshman and all that, but he was playing so well and then he does a couple things that’ll just drive you to insanity,” Kellogg said.

UMass has been in the spot it found itself on Wednesday before so many times this year; not being able to execute and slow down the other team in the game’s most clutch moments. In a season where not much has gone right for the Minutemen in conference play, Kellogg said he’s looking to find a way to break the trend and see some positive results.

“I’m going to go on this bus for the next five hours and I’m pulling out every play we made in the second half that was just a bad basketball play or a missed assignment, where we just looked like we’re not a very good team in those situations,” Kellogg said.

UMass will have the weekend off from games and will be back in action Tuesday night against Rhode Island at Mullins Center.