UMass men’s basketball looks ahead to George Washington matchup, A-10 tournament, as they try to finish season strong 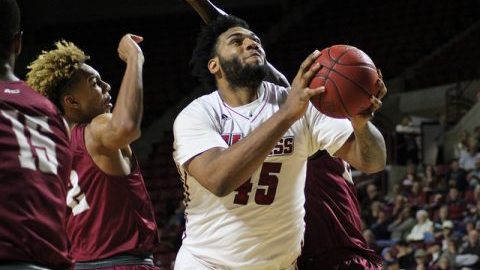 In college basketball, it’s not too often that a center is compared to Shaquille O’Neal, one of the best centers the game has ever seen and a newly-enshrined hall of famer.

Well that’s exactly the comparison that George Washington coach Maurice Joseph made Monday when talking about Massachusetts men’s basketball center Rashaan Holloway, in preparation of the Minutemen-Colonials matchup this Thursday.

“We have a very interesting matchup in Holloway, who sometimes looks like Shaquille O’Neal down there with double-teams and people fronting him and throwing different things at him,” Joseph said in his weekly media teleconference. “He just seems to get the ball in the deep post position and score the ball, so we have to back our bigs and establish how we’re going to come in and stop him.”

In reality, Holloway has looked like O’Neal at times controlling the game in the post but at other times he’s disappeared and looked like a shell of the potential he truly has.

Down the stretch, UMass (13-14, 3-11 Atlantic 10) will be looking to see the Holloway from the Providence game, where he scored 21 points against a big conference team, or the one from the VCU game, where the center put up a double-double against one of the best teams in the A-10.

GW (14-13, 6-8 A-10), much like the Minutemen, hasn’t been the most consistent this season, but its 10-3 record at home will be something to keep in mind for a UMass team that has struggled away from Mullins Center this season.

Minutemen coach Derek Kellogg pointed to keeping avoidable mistakes down if UMass wants to come out with a win on Thursday.

“I think the biggest thing for us is our turnovers. We had 19 of them against Davidson the other day with a lot of them coming from our backcourt,” Kellogg said in his weekly media teleconference. “That’s going to be a major focus in order to win on the road at GW or win any of the other games. We have to cut those down to 12, 13 or even 14 a game.”

The Colonials are not going to take the Minutemen lightly come Thursday as they know the potential UMass has.

“Donte Clark is one of the most talented wings in this league. He has size and athleticism and strength, so he’s an interesting matchup for any perimeter defender,” Joseph said. “Their entire team poses some challenges. They have some talent, so it’s going to be a tough game for us to figure out what our game plan is going to be.”

The overarching narrative throughout the whole season for the Minutemen has been how UMass will integrate its highly-touted freshman class into a team that returned some major contributors from last year’s team.

Only five players can be on the court at a time, so somebody was going to have to sacrifice minutes. Juniors Seth Berger and C.J. Anderson have been part of that group that has had to yield some time to the younger players. Both men have seen their minutes decrease this season.

Kellogg recognizes the challenge of keeping everyone on the same page but hopes the team factor takes precedence for the Minutemen.

“It’s tough to juggle a big class of young [players] coming in with some guys that have been here. You hope that their character and their ability to want to win and want to help the program will overtake any personal goals per se,” Kellogg said. “Our older guys have done a good job of kind of bringing the young guys in and assimilating them to the team and the basketball club and kind of accepting our roles. That’s not always easy.”

All eyes will be on Kellogg to see how he handles player’s minutes, especially coming into the home stretch of the season.

Believe it or not, March is about a week away and with that comes college basketball conference tournament time.

With UMass out of regular season conference championship contention, the Minutemen have shifted some of their focus to Pittsburgh and the A-10 tournament.

“I think Pittsburgh’s the one that kind of keeps you moving,” Kellogg said. “We don’t have a chance to win the regular season. While we’re looking at Pittsburgh, it’s kind of like whose next on the horizon of whom we’re playing.”

Tip-off for the matchup with GW is set for 7 p.m. at the Charles E. Smith Center in Washington D.C.