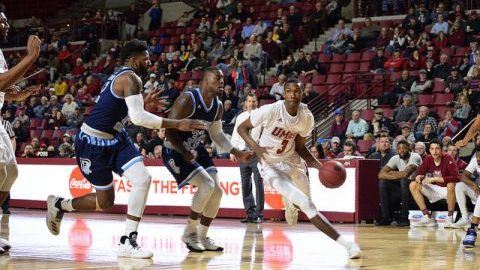 There were no surprises Tuesday night at Mullins Center. The Massachusetts basketball team struggled to find any sort of consistency as it has all throughout conference play while Rhode Island played like a team fighting for an at-large bid in the NCAA tournament.

The Rams delivered the first blow on the game’s opening possession after Hassan Martin scored a hook shot just 26 seconds into the contest and never looked back. UMass managed to tie the game on two separate occasions late in the first half, but the Rams never trailed giving the Minutemen their fifth straight loss, 70–62.

“I think Rhode Island is really close to being an NCAA tournament team,” UMass coach Derek Kellogg said. “They kind of played with a little bit more maturity and a little more toughness than maybe we did tonight.”

“I thought they just were a little bit better than us,” Kellogg added, “just a little bit of a better team right this second.”

For a while, it looked as if Donte Clark was on a mission to single handedly lift the Minutemen (12-12, 2-9 Atlantic 10) to its first victory in nearly three weeks tying a career high with 30 points on 8-for-14 shooting from the field and 13-of-16 from the free throw line.

Clark carried the load offensively scoring 19 of UMass’ 27 points in the first half with only three other Minutemen converting field goals in the opening 20 minutes.

However, less than two minutes into the second, Clark picked up a cheap third foul on a made 3-pointer from Rams guard Jared Terrell that forced Kellogg to take him out of the game on the following.

With Clark on the bench, URI (16-7, 8-3 A-10) extended its lead to 11 points, all but sealing the Minutemen’s fate as the they never trailed by fewer than five in the second half.

“Sometimes it goes your way and sometimes it doesn’t,” Clark said. “They hit my arm twice, but I didn’t get it. Sometimes it just goes like that.”

Terrell led URI with 14 points, despite shooting a poor 4-for-11 from the field. The other members of the Rams’ big three, Martin and E.C. Matthews, also struggled to find any rhythm on offensive end.

Matthews was held to 12 points on 2-of-9 shooting while Martin scored only nine points grabbing four rebounds.

URI’s win was its fourth in a row and snapped a seven game losing streak at Mullins. The Rams’ last win against UMass in the Pioneer Valley was Feb. 18, 2009.

“Thrilled to come in here and get a win, this place has been a little bit of a house of horrors for us,” URI coach Dan Hurley said. “I think we won this game with elite level defense.”

The Minutemen’s offense continued its woes finishing with 19 turnovers and shooting just 35.3 percent from the field, 3-for-17 from 3-point range on top of 10 missed layups, seven of which came in the second half.

“I thought Rashaan [Holloway] had four or five – I know it says he only missed six shots but it felt like he missed 26 because he had it one foot from the basket quite a few times,” Kellogg said. Holloway was the only other UMass playing in double figures, finishing with 12 points and 12 rebounds.

“I’ve been hurting the team because when they throw it to me and I miss, it’s deflating,” Holloway said. “I’ve got to just buckle down and hope for the best for me to clean up the way I’m playing.”

“I thought we went pretty strong, honestly,” Kellogg added about the Minutemen attacking the rim. “I don’t know how they missed. I’ll probably pull out every missed layup and once again watch it with the guys.”

UMass’ best chance of taking the lead came after Clark tied the game at 19 with a pair of free throws with 5:52 left in the first half. The Rams went from the 11:45 mark of the first half until 3:37 without converting a field goal.

Nicola Akele’s 3-pointer to end URI’s drought broke a 22-22 tie the Rams would not surrender. He finished with 12 points in 18 minutes off the bench.