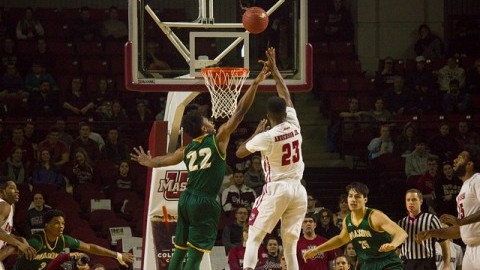 The Atlantic 10, much like the rest of college basketball, fits the mold of today’s game of team’s willing to play smaller, four-guard lineups that favor speed and shooting more than the physical, pound it inside style of play from previous decades.

The Massachusetts men’s basketball team will have its hands full Wednesday night when it faces arguably the most guard-centric team in the A-10 when it travels to Tom Gola Arena to face La Salle. The Explorers’ top five scorers are all guards and account for over 80 percent of their team’s scoring.

Cleon Roberts (8.2 ppg) and Amar Stukes (8.1) also could provide mismatch problems for some of the Minutemen’s guards.

But as talented of scorers the La Salle backcourt is, it’s their size that could give UMass (12-10, 2-7 A-10) fits. Johnson stands 6-foot-7, while Roberts is listed at 6-foot-6. For anyone that’s seen Price in person, he looks like a linebacker on the floor checking in at 6-foot-5, 220 pounds.

“[Their size] is a concern of ours. I think that’s been the case with really a lot of the games you play is the physicality, especially for the guys who haven’t been through it,” Minutemen coach Derek Kellogg said before Monday’s practice.

“Price and Roberts and even some of the other guys are physical and bigger guards that know how to play. That will be a challenge for us. The biggest thing will be to keep those guys off the boards on shots and not give them any second chance opportunities, which has hurt us some in different stretches in these last four or five games.”

C.J. Anderson, who’s been tasked with marking up some the Explorers guards over the past two seasons, thinks there is more of a mental approach than physical one when preparing to face players of that size.

“You definitely have to be more locked in, more focused on their guards play because they’re really strong and guys who like to score whether it’s going inside or shooting the 3’s,” Anderson said. “We really have to pay attention to detail, go over film and we should be ready.”

Much like the Minutemen who are currently enduring a three-game losing streak, La Salle enters Wednesday as losers of three straight after rattling off five in a row earlier in conference play.

The Explorers lost to two fellow Philadelphia Big 5 schools in Saint Joseph’s and Penn by a combine four points last week. They suffered their worst loss of the season Jan. 22 against Virginia Commonwealth, 90-52.

“I never saw them play yet,” point guard DeJon Jarreau said. “I heard they’ve got some good guards and they’re run-and-gun, so that should be a good game. I like those type of games, fast break, fast-paced game.”

Despite the loss to the Patriots, Kellogg said after the game he felt UMass was taking strides in the right direction of executing better, especially in the second half. Against La Salle, he’ll be looking at how the Minutemen execute mentally from the start.

“I think for us to take that next jump that’ve I’ve been pushing on our guys and talking about is really a mental approach to it, especially with our younger guys … mentally getting these guys to realize how tough it is to win in this league, especially with a lot of the experience teams and guards out there,” Kellogg said.

“That would just be a huge focus for us of just the mental approach of how you hard you have to go and how tough it is for a full 40 minutes in this conference, especially against a team like La Salle,” Kellogg added.