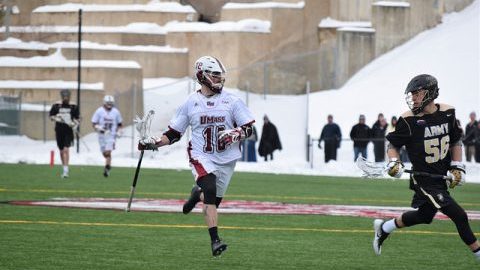 It’s never easy losing three starters on any defense. It’s even tougher when those players were team captains.

The Massachusetts men’s lacrosse team graduated three defensive captains last year—Kyle Karaska, Bob Fahey and Kevin Porzelt—leaving a large void to be filled in the back end for the Minutemen.

“It’s hard to replace any really good leaders, but you hope that Tyler [Weeks] and D.J. [Smith] really paid attention to those guys and how they led,” UMass coach Greg Cannella said. “It certainly has helped them now and will help them throughout the year here.”

Typically, it is asked of the seniors to lead a team. The Minutemen (0-2) are sticking to that idea this year, appointing close defenseman Tyler Weeks, goalkeeper D.J. Smith and attackman Grant Consoletti as team captains. Having two players at the back end of the defense holding authority over the team gives stability to the younger, less experienced players who have been thrust into action.

Senior Dylan Gruder, a short-stick defensive midfielder, feels he needs to step up and help the younger guys out, but is comfortable knowing there are multiple guys in the back end ready to lead.

“As a senior, you have to be a leader,” Gruder said. “But, at the same time there’s other leaders on the defense who all help each other out. You have Tyler Weeks, D.J. Smith and even sophomores like Isaac Paparo… everyone leads. I think the defense does a great job leading each other. It’s not just one leader, it’s multiple.”

After missing half of last season with a knee injury, Weeks has returned to anchor the defense, and is joined by junior Luc Valenza and freshman Dan O’Brien. Smith takes over in cage after earning six starts last season, while Gruder starts at short-stick defensive midfielder.

Valenza, who played sparingly during his first two seasons at UMass, sat behind former veterans and is finally applying the lessons he learned in his first year as a starter.

“For someone like Luc, when you look at where we are in our society, especially in athletics, this is hard,” Cannella said of Valenza’s patience. “So for a lot of these guys, where they were the top guy at their high school, their county, their state, they come here and suddenly it’s different.”

“For someone to persevere through two years and finally see the fruits of that, that’s an awesome role model. Luc is a great role model for our younger players who may not be playing right now.”

For O’Brien, everything is new. It is not easy for a freshman to start from day one for a Division I program, but that was what Cannella asked him to do. Cannella understands O’Brien may get lost out there at times, but loves the energy and enthusiasm he brings to the team. He hopes that if O’Brien, or any member of the team, makes a mistake, they are doing it at 100 miles per hour.

As with any inexperienced group learning to play together, there will be growing pains. So far, the Minutemen defense has shown flashes of solid play, but they are still far from a finished product. Valenza gave the unit a “B” grade for the season thus far.

“I think we’ve definitely improved a lot from the fall season,” Valenza said. “Each week we progressively get better and better, and we’re not the best so I’d say we’re a good ‘B’ right now.”

Assistant coach Craig McDonald, who works primarily with the defense, has been impressed with the unit, noting how hard they work to continue to improve each day.

“It’s been good so far,” McDonald said. “They’ve had a good attitude every day in terms of coming out, working extremely hard and having a lot of energy.”

With the young group, there is a lot of room to grow, and Cannella doesn’t want the group to stop growing.

“You hope that their potential is at the ceiling and we’re at the baseboard and we can continue to grow,” Cannella said. “The second they reach their potential, you have to set the bar further for the next one. You just hope that they all, more importantly than continuing to play well, they play well together. That will be the key.”

Thomas Johnston can be reached at [email protected],and followed on twitter @TJ__Johnston.