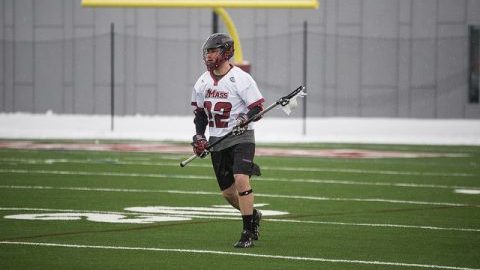 The Massachusetts men’s lacrosse team entered a midseason matchup in 2016 against Penn State last year with a record of 3-4 after an up-and-down start to the season.

The Jekyll and Hyde nature of the team was illustrated by a convincing 16-9 win over No. 11 Ohio State and an overtime loss to No. 14 Harvard, but also by debilitating losses like a 15-7 defeat against No. 7 Brown and a 16-4 drubbing by No. 15 Albany at Garber Field.

UMass left Happy Valley with a win over Penn Sate, but did not return to Amherst all that happy, as now-senior defenseman Tyler Weeks went down with a torn anterior cruciate ligament (ACL), ending his season and effectively the Minutemen’s season in the process, as UMass lost its five remaining games, missing out on the Colonial Athletic Association conference tournament.

“We didn’t win another game without him, so it tells you what kind of influence he has on our team,” Minutemen coach Greg Cannella said.

Now, Weeks is back on the field, healthy enough to play, even if not fully recovered. With one season of lacrosse left, he’s ready to lead UMass and its young defensive core back to the CAA tournament.

When Weeks went to the ground after trying to move left-to-right following a faceoff, he heard a pop, knowing right then the seriousness of his injury. His teammates could also tell Weeks was in trouble.

“I remember standing on the sideline and I saw it happen and my heart dropped,” senior goalkeeper D.J. Smith said. “I felt terrible, but I knew he’s a very mentally-strong kid and I knew it wouldn’t get him too down and I knew he would recover and he would make a good comeback and be the Tyler that we need.”

The old adage that you don’t really know about something until you experience it yourself apparently does not apply to tearing your ACL, because Weeks said his injury lived up exactly to what he had heard from other players.

“Everything that anyone’s ever told me about tearing their ACL, like the pop and how bad it hurts for 30 seconds and it goes away, it kind of fit [the] bill,” Weeks said of his injury.

The recovery and rehab process can be long, and both physically and emotionally draining. While his teammates were out on the practice field preparing for games, Weeks was relegated to the sidelines, working on getting his knee back to full strength.

At times that rehab process can make you feel isolated.

“That’s probably the hardest thing, when everyone’s going out to practice every day and you’re sitting on the sideline just rehabbing the knee, you kind of feel not part of the team at some points. What gets you through it is kind of just staying a part of the team, making sure you’re with the guys,” Weeks said.

Weeks’ teammates definitely took notice of the work he was doing to rejoin them out on the field, and the Andover, Massachusetts native did everything he could to help the Minutemen improve.

Even with Weeks sidelined and not participating in team drills, Cannella could still see the values that make him such an important member to the team both on and off the field.

“This fall he didn’t play at all in practice but he was out there on the sidelines running and helping (assistant coach) Craig McDonald coach, so you saw good leadership and you saw a guy that was a role model for whomever, anybody that ever got hurt and anybody that had to take time off,” Cannella said.

As the most-experienced senior on a defensive group that features a lot of youth like freshmen Dan O’Brien and Dan Tracy and sophomore Greg Pandise, Weeks has taken on a leadership role among the UMass squad.

Cannella sees this most when Weeks takes charge of the defense out on the field during games.

“He’s an on-the-field guy, leads by example, but also he leads in the small group with the defense, and again that’s a big part of what those guys are doing now is that leadership and making sure those guys are sticking together,” Cannella said.

As the goalie, Smith appreciates having someone like Weeks out there in front of him who can take charge and teach those around him.

“It’s great because we have a lot of leadership down on the defensive end and he knows the defense inside and out so if a younger guy like Dan O’Brien or someone might have a question, Tyler’s definitely got the answer right away, which is good for in-game adjustments,” Smith said.

Weeks sees himself as just following in the footsteps of those Garber Gorillas who came before him.

Now in his final season for the Minutemen, Weeks hopes his hard work will pay off to the tune of a CAA tournament appearance.

“[I hope] for the team, success. The team’s working hard. I just want the boys to come together and do well this season and make CAAs. CAAs is what we’re looking at,” Weeks said.